Murray Polner, a regular HNN book reviewer, wrote “No Victory Parades: The Return of the Vietnam Veteran” and with Thomas Woods Jr.,“We Who Dared To Say No To War.” 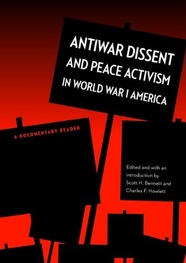 Theodore Roosevelt, who once led a charge up San Juan Hill and never again saw a war he didn’t love (until, that is, his son was killed in WWI), loathed antiwar people and considered them pathetic and un-American. In 1915 he rebuked the Woman’s Peace Party, which never saw a war it didn’t hate, for daring to oppose American entry into the raging European war. “That a mother who is not willing to raise her son to be a soldier is not to be a citizen,” TR thundered.

Take that, you pacifist Moms, said The Rough Rider who never let anyone forget his personal glory at San Juan Hill. To which the WPP’s Charlotte Perkins Gilman shot back: “Motherhood is essential to the preservation of the race and so is fatherhood but being a father is by no means synonymous with being a soldier. The business of a soldier is to kill people and be killed.” The Yale sociologist and anti-imperialist William Graham Sumner and TR despised one another and he later added his bit characterizing TR’s war as a travesty “a petty three months’ campaign when it knocked to pieces a poor, decrepit, bankrupt old state like Spain.”

The Roosevelt-Gilman exchange (but not the Sumner quote, which is from his book “The Conquest of the United States by Spain”) is cited by Scott Bennett, professor of history at Georgian Court University, and Charles Howlett, professor of education at Molloy College, in their impressive documentary reader.

Many of the documents they have chosen are quite familiar: Debs’ Canton speech praising “the working class who freely shed their blood and furnish the corpses” in war and for which he received a ten-year prison sentence; Helen Keller’s call for a strike against war, “I have entered the fight against preparedness and against an economic system under which we live”; Republican Senator George Norris’ denunciation of war in 1917 “because we want to preserve the commercial right of American citizens to deliver munitions of war to belligerent nations” and Marine General Smedley Butler’s “To Hell With War” from his widely quoted book “War is a Racket.”

But other documents are rarely if ever seen, and they are the heart of the book, portraying otherwise ordinary men and women strong enough to say “No.” Bertha Wilson’s “The Green Corn Rebellion in Oklahoma,” is by a socialist leader of the anti-draft movement in a state which once had the second largest Socialist Party membership in the nation; a letter calling on Black men not to enlist, saying, “Young Negro men and boys what have we to fight for in this country? Nothing.”; the case of Mary McDowell, a Quaker public school teacher in New York City fired for refusing to sign a loyalty oath—a forewarning of the McCarthy era of the fifties and how some school boards have always tried to punish nonconforming teachers; or perhaps most forcefully and movingly, Conscientious Objector Erling Lunde’s statement at his court martial, after which he was handed a life sentence, later commuted to twenty-five years. He was motivated, he told unsympathetic military judges, by “that unswerving faith in Christ’s teachings of universal brotherhood and truth and in his counsel against force when he said, ‘Thou shalt not kill.’”

Bennett’s and Howlett’s judicious introduction sets the book’s tone perfectly. They refer to the Wilson Administration’s use of the Espionage Act (still used extensively today by the Obama Administration to prosecute alleged leakers and whistleblowers) against Debs, the radical economist Scott Nearing, the IWW, “disloyal” women and others. They deal with the atrocious and inhumane treatment of COs, “the shock troops of antiwar dissent,” who were often subjected to the "water cure” torture, a practice used by the Army against Filipinos in 1900 and which was revived by the Bush Administration during the Iraq War. Seventeen COs were eventually sentenced to death and 142 received life sentences, but all were eventually reduced or commuted as the country slowly came to its senses though the last of the COs were not released from prison until FDR’s election in 1933. Official America during WWI and immediately after targeted left wingers and egged on angry, bitter, conforming, vengeful, and unquestioning patriotic Americans to cheer on the Torquemadas in our midst.

The editors also mention the case of the nonviolent CO absolutist Evan Thomas, Norman’s younger brother, whose audacious life as a dissenter was explored recently in Louisa Thomas’ admirable “Conscience: Two Soldiers, Two Pacifists, One Family-A Test of Will and Faith in WWI.” The editors also refer to the New York State legislature’s Lusk Committee, a post-WWI version of McCarthyism-to-come, “which sought to enforce loyalty and political conformity in education” and demanded public school teachers sign a loyalty oath. Al Smith, New York’s greatest Governor, goes unmentioned, but he was a tough Lower East Side kid who was not intimidated by political bullies. When the Lusk bill reached his desk in Albany, Smith condemned Lusk and his backers as “hysterical and interested in the control of liberal thought” and vetoed the bill. Would that Bennett and Howlett’s dissidents had someone like Al Smith on their side.

COs and other WWI dissidents represented many different strains of beliefs and religions, pacifists and non-pacifists, anarchists, communists, liberals and conservatives. They reflected the varied nature of the American anti-war tradition, quite different from the myth of the liberals equal peace and conservatives equal war division that has long prevailed. There have always been conservatives against war, which became even more evident with the emergence of the Anti-Imperialist League in 1900. Today, the paleoconservative American Conservative magazine and the website antiwar.com are but a few of the most prominent conservative/libertarian opponents of war.

“The WWI peace movement left several significant legacies,” Bennett and Howlett write, among them the creation of new organizations such as the Fellowship of Reconciliation and the ACLU. They and other like-minded groups inspired the ill-fated Kellogg-Briand Pact, which tried to outlaw offensive wars, but more significantly, they helped create a powerful secular impulse, “more antiwar than pacifist,” and which. since Vietnam, has expanded.

The editors sensibly conclude that, “although the peace movement did not prevent the Second World War, the Cold War, or the 9/11 wars, in a world stocked with weapons of mass destruction—nuclear, chemical and biological—the risk of human destruction makes peace even more pressing than during the First World War.” Exactly.

Every generation needs to be reminded of and taught the heavy price exacted by war. “Antiwar Dissent” would be a fine gift to high school students before their generation is called on to once again fight some new and pointless war.