This excerpt is from "“Steve Kindred (1944–2013) and University of Chicago Students for a Democratic Society: a distinctive strain within the New Left, both passionate and reasoned,” The Sixties: A Journal Of History, Politics And Culture (May 2014). 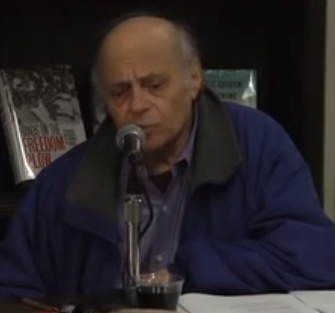 Steve Kindred, my friend, brilliant Students for a Democratic Society (SDS) leader, organizer with Teamsters for a Democratic Union, activist in the struggle to keep the Stella d’Oro plant in the Bronx open, campaigner against a lockout of workers by Sotheby’s auction house—all this, and a thousand other causes. Steve is, for lack of a better word, “gone,” in a New York hospital, suffering from abdominal cancer, which has spread. Having been close to Steve and having admired and loved him now for 50 years, I am very sad. Other people’s deaths have reminded me of my own mortality. This one focuses me on what we have all lost with Steve gone, and what new movements might learn from him.[1]

Two clichés about Steve and me come to mind. First, his death violates the laws of nature that say that teachers should die before their students. This applies: I was Steve’s teacher at the University of Chicago in the mid-1960s. The other cliché, that teachers often learn from students, also applies: Steve was my student, and contributed to an electric classroom atmosphere which took me from class to typewriter to write “Jack Tar in the Streets” and “The American Revolution Seen from the Bottom Up.” I had grown up left, but Steve was my instructor (along with Chris Hobson) in the first larger struggle that I experienced in the 1960s in which we had to anguish over programs, directions, and strategies—more complicated than just offering my body for arrest in the civil rights and anti-war protests that I had participated in but that were planned and led by others.

In the early 1960s, the University of Chicago (U of C) was trying to remodel itself as less Jewish, more sports-oriented, and less left. Director of Admissions Charles O’Connell interviewed and rejected a long-haired applicant: O’Connell’s report described the candidate as “fingering his long tresses.” The student described himself as the son of a victim of McCarthyism: “you can see what kind of a family he comes from,” said O’Connell. “We have enough kids here who cause trouble … Better let him go to Reed or Berkeley.” My students sat in on the 50-yard line, perceptively understanding what the return of football—President Robert Maynard Hutchins had dropped football in 1939—would do to the place. I had warned students of the horrors of becoming like Yale. In my first ecstasies at finally coming “home” to the U of C after 10 years at Yale, I taught while dancing barefoot around the Cobb Hall seminar tables. As for the Jews: the typical undergraduate was exemplified in the invented character of “Aristotle Schwartz.” To cure this condition, the U of C instituted a euphemistically named “Small Town Talent Search”—perhaps a local version of the Ivies’ prior quest for “geographical diversity,” that is, in translation, fewer New York Jews. Steve Kindred seemed to fit: the son of a Methodist minister in Iowa and at the time in so many ways a seeming ur-goy. U of C had not understood its capacity, under the control of an alliance of Hutchinsonians and Straussians, to make radicals out of sons of ministers. (Perhaps Steve, with a passionate and principled father, was already on his way there.) With the draft and the Vietnam war, U of C SDS looked for an approach that would address these issues in ways that meshed with the highly intellectual undergraduate culture. In this quest, Steve was a central thinker. Chicago had never compiled class ranks; now Selective Service wanted them to do so, and to hand over to the Feds what amounted to a kind of a death list. U of C SDS brought out the many ways in which this was a corruption of the educational process, at odds with the College’s often repeated shibboleth, “the life of the mind.” (Wittily, Chris Hobson gave SDS’s campus newsletter that name.) Certainly, I found SDS’s argument compelling: why should I, as faculty, decide who will live and who will die? As in so much of Steve’s politics, this focus addressed a passionate belief in learning held by U of C students, and connected that belief to the war as well as to the life of the university. This minority strain within the New Left gives us a vantage point from which to re-examine the larger Movement and to ponder what might have been had this kind of course been followed. A different SDS was possible, and U of C offers a concrete example of an alternative.

For several days in the spring of 1966 we occupied the Administration Building: During the sit-in, Staughton Lynd and I taught “history from the bottom up”; Naomi Weisstein and Heather Tobis Booth taught Women’s Liberation. It was a memorable and ecstatic time, with volunteer elevator operators crying out, “Second floor—sleeping, Third floor—studying.” The entire sit-in debated strategies and directions in long meetings of the hundreds present, brilliantly chaired by Jackie Goldberg (just out of Berkeley and the Free Speech Movement, and later a state legislator in California). Noted professors came to the building to tell us that we reminded them of Nazi storm troopers. (Hannah Arendt had earlier responded to my public question in Mandel Hall, saying to a large undergraduate audience that she would not state a position on the war.) Responding to such attacks, I said, in words that turned out to be prophetic, that I would feel myself more honorably treated were I employed by the people in the sit-in rather than by the administration whose building we were occupying. This moment of unexpected faculty solidarity with students, after a parade of accusations, produced a scene that I will always remember: I worried lest the standing ovation might disrupt the sit-in.

The time came when it looked as if Mayor Daley’s brutal Chicago police would arrest and evict us if we stayed in the building longer. Steve, Chris, and the others wanted to stay in. But we were losing our constituency. Left faculty members came before us with the “you’ve made your point, now go home” speech. A revered dean wept crocodile tears, expressing his love of students. Always seeking to lead their constituency in more radical directions, but also always seeking to stay with them, we came to the difficult decision to leave. We had been outvoted, and we obeyed. Today the building is called Edward H. Levi Hall. It was Provost Levi, later Nixon’s Attorney General, who had told our little faculty group that he could not resist the government’s demands for class ranks because of what he saw to be the “unlovely” consequences of having, perhaps, to receive a subpoena—as if nobody had ever challenged a subpoena.

I write all this from memory, having run up against a stone wall in seeking to get the U of C library to establish an archive on student protest parallel to the Berkeley Bancroft Library Free Speech Movement (FSM) Archives. FSM and U of C SDS had much in common. They avoided the parochialisms of a narrow and depoliticized student power, while also avoiding the other end of the spectrum: the Third-World vanguardism—and the attendant implied unworthiness of mere student rights—which was to contribute so much to the death of the student movement. U of C, and its present College Dean (an ethically challenged historian and adversary of protest), want to erase all positive memory of that time. Students were so badly treated—40 or 50 were thrown out in 1969, many on the basis not of their actions but rather on the basis of political beliefs. (After the protests of that year, the disciplinary committee asked such general and self-incriminating questions as, “What is your conception of the university?”) U of C’s memories of mistreatment of students are so strong that the Alumni Office refers to the classes of 1964—74 as the “lost classes.” No wonder. The outside world knows the place as the home of rotten and barbaric economic theories (consider the barbarities of the Milton Friedman- influenced Chilean “Chicago Boys”); I know it as a place where the Straussians who ruled the introductory required social sciences courses—“Sosh I” and “Sosh II”—applied their retrograde views to the snippets of US history that the remnants of Hutchins presented in such weighty but lightweight compendia as The People Shall Judge. When I was fired, before the customary second term renewal as assistant professor, it came about through a coalition of the Straussians, who despised me for having sought to teach history and historical context, and the History Department, ruled by the hideous right-winger Daniel Boorstin, and by chair William Hardy McNeill, who contributed to the political neutrality of the place by running an on-campus military intelligence unit. “Your convictions,” McNeill told me when he fired me, “interfered with your scholarship.”...