What Does Economic History Tell Us About the Upcoming Scottish Vote?

S.J. Garland holds degrees in History and English from Simon Fraser University and the City University, London. She is the author of the novel, "Scotch Rising" (2014). 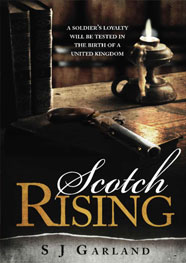 My grandmother was of Scottish descent, and my mother told me frequently she was so tight with money she squeaked when she walked. My grandmother as a child during wartime and rationing aside, had a trait my Scots family quietly admired, frugality. In looking at the upcoming Referendum for Scottish Independence in September, I cannot help thinking of my grandmother and how she would be weighing her bank balance as much as her heart when it came to the polls.

And much like my grandmother, Scots of the early 18th century were also very concerned about their pocketbooks, which was one of the deciding factors that enabled the union of England and Scotland.

The Acts of Union in 1707 passed in the English Parliament and subsequently in the Scottish Parliament bringing the two nations into one. The answer to how Scotland and England finally came together after hundreds of years of war lies in the state of the Scottish nobilities bank balances.

The summer of 1706 saw the first Articles for the Acts of Union brought in front of each the Scottish and English Parliaments. The Act of Union passed in England with relative ease, as it ensured the passing of the Scottish crown to whoever wore the English crown. This provided security for the northern border, as Scotland could not make alliances using their royalty with other countries. In Scotland the story was much different.

The exploitation of natural resources utilized in primary industries featured heavily in Scotland’s economy before the Act of Union in 1707. Large landowners controlled most of the wealth in the country and kept the rest of the population in poverty through the feudal system. The poor weather and soil conditions of the Scottish countryside made agricultural development slow and arduous, with farmers eking out a living mostly for their landlords. The geographical position of Scotland and its two main ports, Glasgow and Edinburgh, made them inconvenient places to send ships for trade. The country suffered under a stagnant economy for years before colonization in the New World brought new economic, social and political opportunities for Scots willing to take their chances across the Atlantic. This further exacerbated Scotland’s economy by draining skilled workers from the countryside and cities.

By the time the Act of Union came before parliament, many of the Scottish nobles had another financial reason to vote in favor. The disastrous outcome of the Darien Scheme, a failed attempt to establish the colony of Caledonia in the country that became Panama, left the major landowning nobility and other wealthy businessmen in severe financial distress. The impact the failure of the colony had on the whole of Scotland’s economy can be imagined by the estimate that between a quarter to half of all the money circulating in Scotland had been lost in the venture.

Faced with not only their own financial ruin, but the entire country’s slide into further economic distress, many historians have argued Scots nobles voted in favor of the Act of Union. Indeed, not only did England give Scotland a large financial boost in the form of thousands of pounds. It has also been alleged many in the pro-unification corner of the House of Lords in Scotland received funds from English benefactors. Some individuals key to securing the Union’s passage such as James Glasgow received personal funding from the Queen's exchequer.

Not only were the nobility attracted by the prospect of ready cash to ease their immediate financial difficulties. The prospect of free trade with English controlled colonies was also a major selling point to Scottish nobles and businessmen looking to expand their portfolios. In economic terms, the passage of the Act of Union was a great opportunity for the Scottish aristocracy.

Today, much as 300 years ago, economics promises to be a major factor for the Scottish people as they weigh the decision about independence. To be sure, both separatists and supporters of the status quo emphasize the economic benefits of their preferred outcome.

It appears neither the Yes Scotland nor the Better Together campaigns have forgotten their Scottish history. Those favoring independence, known as Yes Scotland, have answered questions such as how will Scotland become independent, referring to the devolution of the Union with England. This means unravelling shared institutions such as defense, the National Health Service, state pensions and the use of shared natural resources. The Yes Scotland campaign maintains nothing will change with separation, and in fact the breaking of the union will build a fairer society. Yes Scotland points out that the Scottish Parliament already underwrites the costs of these systems to a great degree.

Whichever side's claims are accurate, one thing remains clear. As with the Acts of Union in 1707, macroeconomic forces will play a key role in the Scottish Independence vote.

Scots like my grandmother would loved to have seen an independent Scotland, but not at the expense of her livelihood. Which gives all the more power to one of the earliest detractors of the Acts of Union in 1707, Robbie Burns, who composed the poem, Such A Parcel of Rogues in a Nation, in reference to the nobles who voted in favor of the treaty. As Robbie Burns lamented, “we're bought and sold for English gold.”