Tom Clifford is an Irish journalist, currently based in China. He has written for Japan Times, Irish Independent, the South China Morning Post, Gulf News, the Prague Post and many other publications. He covered the Georgian War in 2008. 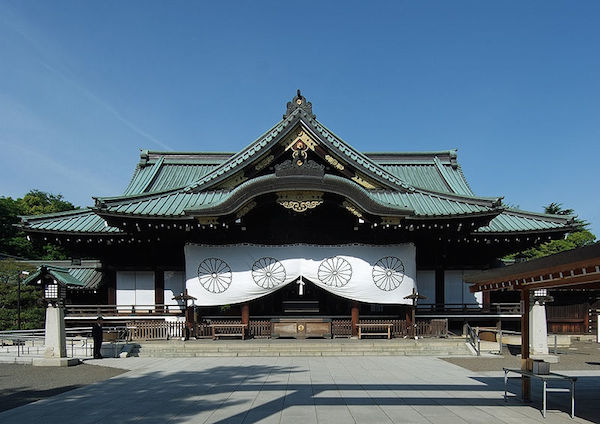 Yasukuni apologists will say that this a place where the war dead can be remembered and that Shinzo Abe’s offering of a Masakaki “sacred tree” branch to the shrine on Monday was perfectly within the remit of a Japanese prime minister.

You can imagine the outrage if German politicians visited or gave offerings to a shrine that denied the Holocaust.

It is not just the fact that not a single body is buried  at Yasukuni shrine, though more than 2,466,000 souls are enshrined there. By going to that shrine, by giving offerings to the shrine, Japanese politicians are turning their backs on another option. Just up the road is the Chidorigafuchi National Cemetery with the remains of 352,297 unknown Japanese soldiers and civilians. It is tranquil, serene, respectful.  Its evergreen trees provide ample places of shade. It is close to Yasukuni and is served by the same subway stop, Kudanshita. Like Yasukuni, it is near the Imperial palace. The emperor, who shuns Yasukuni, even though his ministers go there, is a frequent visitor.

Chidorigafuchi’s significance has not been lost on Washington.

US Secretary of State John Kerry and Defense Secretary Chuck Hagel paid their respects during a visit to Japan in October, the most senior foreign dignitaries to do so since the Argentinian president visited in 1979, the year Yasukuni announced that the souls of convicted war criminals had been enshrined.

When Kerry and Hagel visited, US defense officials went on record saying that the cemetery was Japan’s “closest equivalent” to Arlington National Cemetery. A US official said that Kerry and Hagel were paying tribute at Chidorigafuchi, maintained by the environment ministry, in the same way that “Japanese defense ministers regularly lay wreaths at Arlington”. Yasukuni is funded by a private organization, the Association of Wartime Bereaved Families.

Yasukuini’s role is to minimize, or better still whitewash, Japanese war crimes and portray the expansionist Japanese empire as the victim. It is a place where history and memory can be altered to fit a present-day agenda.

No mention of the 1937 Rape of Nanking is made at Yasukuini’s modern museum, with a Zero fighter at the entrance.

Yasukuni does not operate in a vacuum, it is symbolic of a wider aspiration to portray Japan’s wartime role in a favorable light and set the scene for a more aggressive foreign policy. School textbooks attempt to portray Japanese aggression in the 1930s as the “liberation of backward nations”. The Japanese education minister is proposing to reject textbooks that do not adopt a “patriotic tone”.

Abe is using Yasukuni to help forge a  greater role for the Japanese military.

If a Japanese politician wanted to remember the horrors of war, the lives lost,  then Chidorigafuchi National Cemetery would seem the obvious choice.

Those who deny history are not always condemned to repeat it but denial is a dangerous place to start on any journey and it is fully withinn the bounds of legitimacy to raise questions about the destination. The signposts are becoming clearer.

Abe hopes to scrap the constitutional interpretation that Japan cannot exercise the right to “collective self-defense” and wants to do it this summer. But he is meting opposition.

It is “a dangerous move that could lead to military actions by Japan’s  Self-Defense Forces abroad’’ and will  “change the basic shape and defense posture of postwar Japan, which are based on its resolve not to repeat the mistake of treading the path to war’’.

These thunderous words were not issued by a marginalized dodgy think tank seeking publicity.  They were part of a Japan Times editorial published on March 16.

Collective self-defense is a vague, fuzzy phrase engendered to give a feeling of helping others in times of strife. It is almost comforting. But it is inappropriate for what Abe is seeking. Far better to call it selective self-denial.

The official English translation of the article is refreshingly clear.

“Aspiring sincerely to an international peace based on justice and order, the Japanese people forever renounce war as a sovereign right of the nation and the threat or use of force as means of settling international disputes. (2) To accomplish the aim of the preceding paragraph, land, sea, and air forces, as well as other war potential, will never be maintained. The right of belligerency of the state will not be recognized.’’

But so what? Why does it matter? The answer is simple. The very foundations for Japan’s democracy are at stake, according to that same Japan Times editorial.

“Abe’s attempt to skirt this requirement poses a real threat to Japan’s constitutional democracy,’’ it said.

The wording is precise and clear. So is the warning.