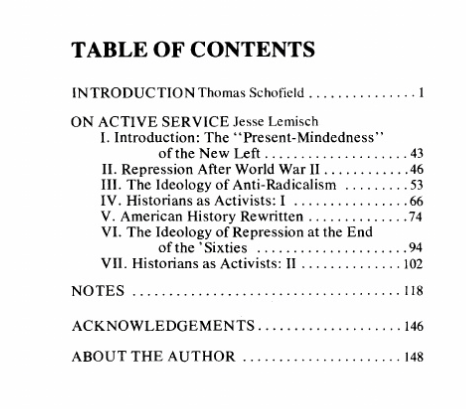 1. History News Network
2. Academia.Edu
3) Dropbox (courtesy of LD Burnett)
At the tumultuous 1969 meeting of the American Historical Association, I presented a paper,: “Present-Mindedness Revisited: Anti-Radicalism as a Goal of American Historical Writing Since World War II” (there is a description of this presentation and the atmosphere at the AHA in Peter Novick’s chapter, “Collapse of Comity,” in That Noble Dream: The ‘Objectivity Question’ and the American Historical Profession. The paper had an interesting history after that first presentation. After much positive (and negative attention) at the AHA meeting and in the New York Times and elsewhere, I submitted it serially to the American Historical Review and then to the Journal of American History. It received stunningly negative readings. R.K, Webb of AHR wrote: (3/27/70)” “I wonder if the activism of the New Left historians today, unlike the activism you so deplore in your article, may not be a bar to serious scholarship that can appeal to any scholar outside the sect itself..” Marty Ridge at the JAH (a nice man) sent me (7/17/70) a fifteen-page handwritten negative report from his anonymous reader. The reader wrote, “Lemisch is certainly the Tony Galento [an unorthodox boxer] of the Left I don’t know how you can tell him that he certainly cannot do it in the pages of the Journal. He probably believes that he can, which says something about how far he and his ilk are estranged from civilization [emphasis added].” Ridge himself wrote, “This essay more than any that I have read in the last several years has disturbed me.”

I was invited to present versions of my paper at dozens of institutions, where it received an enthusiastic reception, particularly from younger historians. In those years, after national attention to my paper, and earlier political firing/non-renewals at the University of Chicago and Northwestern, I was preoccupied with the problems besetting the job-seeker in a two-career family, exacerbated in my case by a partial blacklisting and repeated department votes vehemently in my favor over-ruled by the one senior holdout who would deliver to the dean/provost the over-my-dead-body speech. Shortly after I arrived at SUNY-Buffalo in 1973, I made contact through law student Thomas Schofield with New Hogtown Press in Toronto, a small left press with excellent publications in social and labor history. Thom, who had been an undergraduate of the at the University of Toronto, arranged to write an introduction for a Canadian edition, and it was published in 1975 as On Active Service…. Almost 40 years later, people who want to read it encounter difficulties, and I’m told that there is lively circulation in xerox samizdat. Recently I posted on the US Intellectual History blog a short article. “Higham, Hofstadter and Woodward: Three Liberal Historians?” This precipitated fierce debate, with some 80 comments, many of them lengthy and, quite frequently, over the top. It seemed to me that it was time to make On Active Service, and I have found ways to do this, online and free.

Historians: now that On Active Service is so easily available, please consider assigning it in courses.