Crimea and the Dark Side of Self-Determination

Walter G. Moss is a professor emeritus of history at Eastern Michigan University. He is the author of A History of Russia, Vol. I and Vol II. 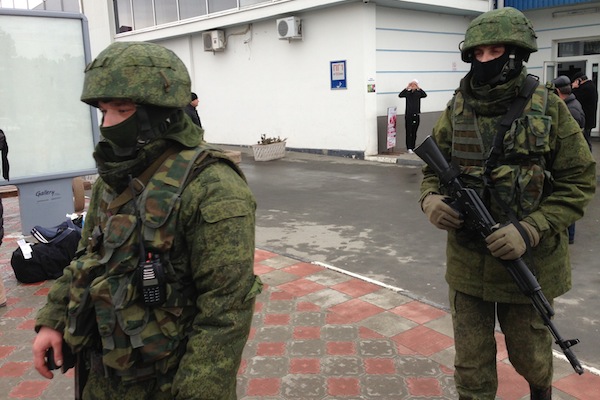 On March 16 Crimeans overwhelmingly voted for “the reunification of Crimea with Russia.” Vladimir Putin and other Russian government officials insisted that the vote was in keeping with the principle of self-determination. After briefly indicating the history and popularity of this concept, this essay, while not denying its positive aspects, will examine its dark side. Finally, it will suggest a better way of dealing with self-determination than has been undertaken in the past.

The first enunciation of self-determination is usually credited to U. S. President Woodrow Wilson, who told the U.S. Congress in February 1918: “National aspirations must be respected; peoples must be dominated or governed only by their own consent. ‘Self-determination’ is not a mere phrase. It is an imperative principle of action, which statesmen will ignore at their peril.” Months earlier, however, shortly after coming to power in late 1917, the new Soviet government proclaimed “the right of the peoples of Russia to free self-determination, even to the point of separation and the formation of an independent state.”

Although the principle eluded exact definition, self-determination suggested to many that following World War I each nationality (for example the Poles) was to have the right to live under a government of its own choosing and that where feasible European geographic boundaries were to reflect major national or ethnographic divisions.

Two points, however, should be noted: 1) Wilson and other Allied statesmen after World War I did not think that self-determination was appropriate for all peoples, e.g. Africans or Asians. 2) The new Soviet government under Vladimir Lenin had no intention of allowing any true self-determination by Ukrainians, Georgians, and the other nationalities of the new Soviet Union and soon crushed the attempts of those peoples to achieve it.

Despite Lenin’s and Wilson’s reticence to apply the principle of self-determination across the board, it has remained a popular concept for peoples trying to break away from old political structures (often colonial empires), usually to create their own independent states. The United Nations Charter (1945) stated that one of the purposes of the UN was to “develop friendly relations among nations based on respect for the principle of equal rights and self-determination.” When the Soviet Union dissolved into fifteen separate countries at the end of 1991, Czechoslovakia into two countries in the “velvet divorce” of 1993, and Yugoslavia was torn apart by ethnic rivalries in the early 1990s, self-determination was often the rallying cry.

The bloody conflicts in the former Yugoslavia in the 1990s shocked the world into realizing the first major problem with self-determination: seeking it can and has often led to tragic ethnic and national conflicts. In that place and time, conflicts among Serbs, Croats, Bosnian and Kosovar Muslims, and other ethnic groups led to the deaths of hundreds of thousands and created millions of refugees. The problem with self-determination in Yugoslavia -- created in 1918 as the Kingdom of Serbs, Croats, and Slovenes – was that it contained six “leading nations” and eighteen other nationalities often intermingled in such a manner that dividing them into separate ethnic territories would have been virtually impossible.

In the 1990s one of the major causes of Yugoslavian violence was Slobodan Milošević, the head of the Serbian government. He frequently insisted on the self-determination rights of Serbs outside of Serbia, e.g. in Bosnia-Herzegovina and in Macedonia (two other new states that emerged after the collapse of the old Communist Yugoslavia). Especially in the former state, where Serbs, Croats, and Bosnian Muslims were all intermingled, this insistence and Serbian support for Bosnian Serbs just exacerbated ethnic conflict.

Milošević’s tactics in the 1990s bore some resemblance to Hitler’s in the late 1930s. In September 1938, the German Führer stated: “Now at last, almost twenty years after the statements of President Wilson, the right of self-determination for these 3,500,000 [Germans in Czechoslovakia] must come into force.” Soon afterwards Germany annexed most of them, the so-called Sudeten Germans. The Baltic city of Danzig (later Gdansk) was then under League of Nations’ jurisdiction, but the population was overwhelmingly German. Hitler insisted on Danzig’s right to self-determination and to reunite with Germany, an insistence that helped lead to the outbreak of World War II in Europe.

Outside of Europe there are examples aplenty. Rwanda stands out. There, according to one reputable source, “the country's two main identity communities [Hutu and Tutsi] each took on aspirations of national self-determination.” In 1994, such seeking was a major factor leading to the deaths of about 800,000 people, overwhelmingly civilians.

A second major problem with self-determination is that it is too easily manipulated by cynical leaders such as Hitler, Milošević, and Putin. Considering Putin’s previous suppression of self-determination in Chechnya, few astute observers doubt that his support of the Crimean referendum and plans for annexation are a reflection of power politics, of realpolitik, and not of any idealistic concern for self-determination.

A third major problem with self-determination is the murkiness of the concept. In December 1918, Wilson’s own Secretary of State, Robert Lansing, expressed his fears in his diary: “When the President talks of ‘self-determination,’ what unit has he in mind?  Does he mean a race, a territorial area or a community? Without a definite unit, which is practical, application of this principle is dangerous to peace and stability.” Ten days later, Lansing added, “The phrase is simply loaded with dynamite. It will raise hopes which can never be realized. It will, I fear, cost thousands of lives.” His fears proved well-grounded even if he underestimated the “cost.”

To further illustrate the concept’s fuzziness consider the case of Ireland. Until December 1921 the island was all part of the United Kingdom, but many Irish insisted on self-determination, and from 1918 to late 1921 they fought against the British to obtain it. But what did self-determination mean for the Protestants in Northern Ireland, where they constituted a majority of the population? Many of them were descendants of earlier immigrants from Scotland and other Protestant parts of Great Britain. What if they did not wish to become part of an Ireland dominated by Catholics? Although the British government in December 1921 agreed to recognize the Irish Free State, a self-governing dominion comprising most of Ireland, it did not include Northern Ireland. This omission led some Irish nationalists, including the Irish Republican Army (IRA), to reject the treaty and fight an unsuccessful civil war that lasted until 1923. In subsequent decades, the outlawed IRA engaged in sporadic assassinations and bombings in order to end British control over Northern Ireland.

Now, in 2014, Russia’s defense of “encouraging” the Crimean vote on “reunification” sounds eerily similar to earlier such defenses by leaders who used the right of self-determination to gain territory that immediately before had been part of a neighboring country. Just as the Germans in the Sudetenland of Czechoslovakia formed a majority in that area, so the Russians are a majority in the Crimea. And just as Nazi Germany annexed the “German” part of Czechoslovakia, so Russia intends to annex Crimea from Ukraine. After the annexation of the Sudetenland, the world wondered if Hitler would grab more Czechoslovakian territory. He did. Today, the world wonders if Putin will attempt to annex more Ukrainian areas.

Of course, there are differences as well as similarities in the two cases. For one thing, Western leaders have increased Putin’s insecurities by extending NATO first to Poland in 1999 and then in 2004 to Estonia, Latvia, and Lithuania, the last three being former republics of the Soviet Union and on Russia’s borders. And, of course, seeking self-determination does not have to lead to territorial grabs or bloodshed. The fact, however, is that its coupling with ethnic or national aspirations has too often led to such tragic consequences. Is there not a better way to advance peoples’ rights and freedoms than insisting, regardless of costs, on self-determination?

Much of the violence resulting from an insistence on self-determination has occurred because of the failure to keep it within its proper bounds, restrained by other important values. Even the Russian ambassador to the UN, Vitaly Churkin, recognized that self-determination is not an absolute right. Shortly before the Crimean referendum, despite defending it, he spoke of the need for a “balance between the principles of territorial integrity and the right for self-determination.” In our own Civil War, President Lincoln and the North fought for the dominance of the former principle. And despite the UN Charter’s words about respect for self-determination, the UN itself and other interpreters of international law have often demonstrated their belief that the principle should at times be trumped by other ones.

In Ethical Realism: A Vision for America’s Role in the World (2006), Anatol Lieven and John Hulsman recommended that the U.S. pursue a type of foreign policy advocated by Reinhold Niebuhr, George Kennan, and Hans Morgenthau, one that combined realism with idealism. The three men “shared a belief in the values of modesty, prudence, moderation, and tolerance, leading in practical terms to a preference for negotiation over violence whenever possible, and a belief in peace as the necessary basis for human progress.” Such a peace-seeking policy of “ethical realism” is also appropriate for other countries, including Russia.

Other sagacious political thinkers, like the philosophers Isaiah Berlin and Martha Nussbaum, recognize the need for toleration, imagination, and empathy when it comes to other people. In the New York Times in 2010, Nussbaum opined: “We need the imaginative ability to put ourselves in the positions of people different from ourselves, whether by class or race or religion or gender. Democratic politics involves making decisions that affect other people and groups. We can only do this well if we try to imagine what their lives are like and how changes of various sorts affect them.”

It is not enough to insist on self-determination, or national interest, or Russia’s “historic right to Crimea,” or American exceptionalism. When any ethnic group or nation insists, like immature fans at a sporting event, “We’re No. 1,” they are guilty of collective egoism. The conduct of international affairs should not be based on simplistic slogans. If we are to avoid in our present century much of the bloodshed characteristic of the previous one, any such slogans, including self-determination, have to be constrained by a hierarchy of other values. Among them peace, empathy, and tolerance are not the least important.