The Secret Life of Teaching: Smart Board, Dumb Teacher 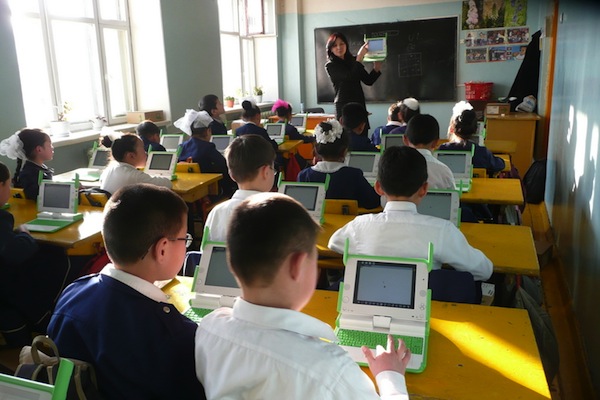 Mid-morning, mid-March. Outside, it’s frigid. Inside, the radiator heat makes me woozy. A few history teachers have gathered here in my classroom, at the behest of Hannah, our department principal, for training on the Smart Boards we’ve all received as part of the school’s latest technology upgrade. One more round of being nudged to learn things we never want know and will be incompetent with when we try. I’ve made my peace with Smart Boards as a matter of using them as glorified projectors. But now we’re being nudged to use them for classroom note-taking and other tasks. So it is that the rising waters of technological innovation still manage to reach us. Now we get to be the confused, bored, and resentful students.

Our technology maven, Jessica, an impressively competent outside consultant who’s clearly younger than her salt-and-pepper mane would suggest, is chatting away about all the tools and applications that are now at our disposal with the new software that can be easily downloaded at . . . I didn’t quite hear and don’t want to ask. My colleague Tony Snowden, who’s always been an early-adopter -- he had an iPhone on day one -- is querying her closely on how to access the feature she had been showing us before she moved on to whatever it is that she’s now doing. “You just go and adjust the settings on the system preferences menu,” she says, and Tony nods with satisfaction. “Just be sure you have it on the default settings option,” she adds.

“Of course,” Tony says in a tone of good-natured ribbing, “your default setting is permanently set to off, Ed.”

Absolutely,” he replies, happy to be the butt of a joke.

Our maven renders a thin smile. I have a fleeting sense of sympathy for her: it must be tedious to talk to idiots all day. I glance up at the clock. I’m missing a workout on the Stairmaster; the gym is usually empty this period.

Actually, there had been a point when I was looking forward to this session. At last year’s professional day, I had watched in amazement as one of my colleagues in the science department wrote with a virtual marker on a whiteboard and then instantly turned the words into type. Given the complaints and queries I constantly get whenever I write on the blackboard, this was something I was truly interested in learning about. Despite a twinge of unease to see those slate boards go -- I was surprised when picking up my daughter from a recent playdate to see that her host had a huge blackboard in his kitchen, surely a sign that what was once a commonplace object was well on its way to becoming an antique -- I was ready to finish stepping into the 21st century. Though of course many of the skills I was most eager to learn were ones I could have picked up years ago.

I note that our maven is just now beginning to demonstrate the latest aspects of the handwriting-to-text feature, and raise my hand. “Could we use a real-life example?” I ask. She’s reluctant, I can see from the fleeting expression of irritation that almost imperceptibly crosses her face. But I leap to the front of the room, grab a green virtual marker, and start writing some points I plan to use in class that very day. “You might want to go a little slower,” she says from behind me, having adjusted to my imposition. I try to write:

SOURCES OF WEALTH IN THE POST-CIVIL WAR WEST

It quickly becomes apparent, however, that my handwriting on the Smart Board is even worse than it is on a blackboard -- smears of green sludge.

“You have to learn to write differently,” our maven says.

She ignores him. “You have to write more with your shoulder.” She demonstrates the motion. I nod as if I understand and grab the virtual eraser, dismayed that my sludge doesn’t disappear.

“You have to put the marker down first before you can erase.”

I do so. Now the eraser works, more or less. When I put it down, she comes over, takes the red marker and models how I should actually write. It of course looks perfectly legible.

“Now you turned ‘sources of wealth’ into what you call an object,” I observe. But do you have to make a separate object for each line of the Smart Board?”

Now I’m truly discouraged. It all seems like so much work: making sure you have the right settings; making sure you don’t pick up the eraser while you still have a marker; making sure you write the right way; drawing boxes around the objects; hoping you’ll get the right option for turning it into text: surely it’s simpler just to pick up a piece of chalk, no?

“I gotta run,” says Tony. This session has probably been pitched too low for him. He likes to tinker anyway. I look up at the clock again, and see that if I leave now I can squeeze in that workout after all. I see Ed is also motioning to go. He’s saying something to the maven that makes her break into a broad smile: a divide has been bridged. But not a technological divide: He and I have learned little useful information. We probably needed a day, not an hour. But a day would just be too much with everything else we have going on.

That night as I brush my teeth it occurs to me that some of my students must feel the way I did earlier that day -- probably not about technology, which they seem to take to instinctively, but some of the academic work they’re asked to do. They find it hard but pretend they don’t or try to laugh it off. They fake their way for a while, maybe get the hang of aspects of a subject, and try to keep moving. It’s the improvising that ends up being the skill that gets developed -- the bluffing, faking, and ad-hoc adaptation.

Three days later, a canceled meeting unexpectedly gives me a half hour, and I walk into my empty classroom. I turn on the computer and Smart Board, and begin stumbling around. A half-hour later, I’ve managed to write “Tomorrow’s class will meet in the library” and turn it into text. A triumph. I have no clear idea how facile I’ll ever be on this thing; I suspect I’ll settle into some simple routines that I won’t wander from very much. But I know I have to do this. There’s some part of me that will die less quickly if I do. Truth be told, I'm a little surprised, and more than a little pleased, that I'm not quite ready to be erased.