The Secret Life of Teaching: Romantics

Horace Dewey is the pseudonym of a high school history teacher at the equally pseudonymous East Hudson High School on the unpseudonymous island of Manhattan in the City of New York. This is the sixth in a series of articles entitled "The Secret Life of Teaching." 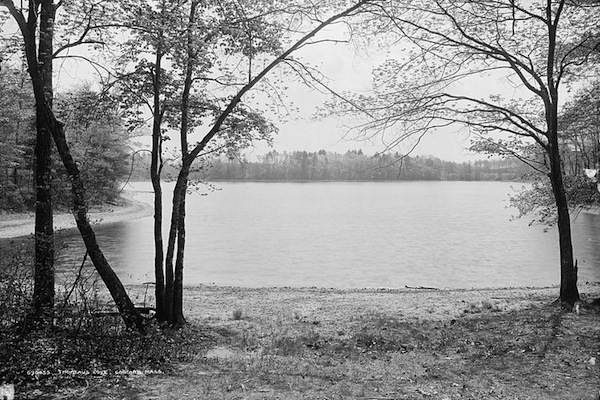 "OK Kids, listen up!" Denise Richardson bellows to the crowd of students on the edge of Walden Pond. "I'm going to go over the assignment one more time. You must follow the directions ...."

I’m stunned by how beautiful the pond is on this autumnal morning. The foliage shimmers on the still water and bursts against the crystalline sky. Dubious about this part of the overnight field trip -- instructing students to go into the woods and have a Transcendental moment strikes me as a contradiction in terms -- I’m nevertheless delighted to be here. In the afternoon, I’ll be one of a set of teachers leading classes along the Freedom Trail. I’m looking forward to indulging with a cannoli at Quincy Market.

I’m jostled back into attentiveness by an unexpected moment of silence that is apparently the result of Denise looking at her watch. "You will have fifty minutes," she tells the students. "That's enough time to walk around the whole perimeter if you want to, but you'll have to keep a good pace. She turns and points to her left. "If you simply want to see the site where Thoreau had his cabin, walk straight this way. It will take you about ten minutes. Whatever you decide, you have to be back on the bus at 11 sharp. Hey! Alan!" Denise claps twice and points at a sleepy student I don’t know (which is most of this batch). "To be awake is to be alive!" Some chuckles; I wonder if they get the allusion or are simply amused by the contrast between Denise’s no-nonsense energy and Alan's torpor. "All right then," she concludes. "Go!"

The students stand around dumbly for a moment, but begin to disperse with growing momentum. "I'm going over to the gift shop," Denise tells me. "I have to make some phone calls. I'll be over in a little while to help round up this herd of cats." I nod and begin walking around the pond, beginning at the far side from the cabin site.

I have ambivalent feelings about Thoreau. I’ve no patience for the cranky misfit of "Civil Disobedience," who thought he could simply opt out of paying taxes he didn't like. And no man who has his mother and sister do his laundry can call himself self-reliant. But for all his prickliness, I sense an inner struggle to live the words, and know that dismissing him as a phony is a little like complaining that sinning churchgoers are hypocrites: it's missing the point. I’m intrigued that Walden Pond is not -- was not -- the wilderness, in fact within easy walking distance from the village of Concord. I read that a railroad ran near the actual site of the celebrated cabin in Thoreau’s time, and apparently still does. Looking ahead I see a cluster of students, and evidence of a rail bed off to the left. I veer away from it so I can continue to savor my solitude.

I haven’t gone far off the main trail when I see two still figures lying side by side in a bed of pine about 100 feet away. They are not engaged in an overt sex act, but the sense of intimacy is unmistakable. From the angle of my approach I can only see sneaker bottoms clearly; the rest is partially hidden in evergreens. One kid apparently has his hands behind his head; the other appears nestled beside him. I don't recognize them, but either or both could be my students. Though I feel obligated to break up this idyll, I’m charmed by it. Years from now, long after Denise Richardson’s (undone?) assignment is forgotten, this will be what these two remember from this trip. Surely even a loner like Thoreau would, or should, approve.

I hear a voice shouting off far to her right. "Horace? Is that you?" It's Denise, motioning a cluster of students to keep moving toward the group's starting point. "Yes!" I respond forcefully. As I do, the two students scramble to their feet and begin running away, presumably to circle behind the cabin site and rejoin the group there. As they do, I see that they're both boys.

"Will you backtrack a bit and round up any slackers?" Denise asks.

"Sure,” I say, turning around and walking in the opposite direction. While I scrunch my eyes, trying to determine if I recognize either boy, I’m approached by my favorite student, Wilhelmina Sperry, notebook in hand, clearly running to make up lost time and ground.

"It's OK, Willie," I say reassuringly. "Is there anybody else back there?"

"No. I’m the last one," she says as she slows to a walk and adjusts her glasses, clearly out of breath. "I wanted to take a few more minutes to make some notes about a spider web I found. I guess I lost track of time."

"Good for you." Willie and I are now walking toward the bus at exactly the same pace.

"I love it here," she says. "That was a good assignment. Now that I've actually seen the pond, I need to re-read the parts of Walden we discussed in class."

A pause. And then: "Mr. Dewey, would you call Thoreau a Romantic writer?"

"Well, not exactly. Not in what I think of in the classic sense of the term, like Wordsworth or Emerson. But I'm sure a lot of people would."

"Fair enough. But remember, Willie: it's a big world out there. There are lots of fish in the pond."

Willie turns her head at me, smiling. "You're not talking about how they restock the pond with fish."

"Thatta girl, Willie. Any writer would be lucky to catch you. Any non-writer, too."