Jean-Christian Vinel teaches American history at the University Paris-Diderot. He is the author of The Employee: A Political History, published by the University of Pennsylvania Press in 2013. 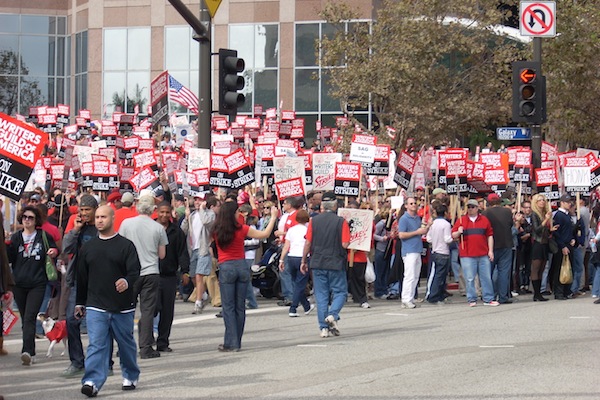 Are university professors workers? Last week, the strike at the University of Illinois, Chicago, highlighted the limits of the vaunted “shared governance” system and put unionization by scholars and academics front and center. In the aftermath of this two-day walk out, however, one should remember that since the 1980 Supreme Court decision in Yeshiva v. NLRB, academics working at private institutions have been denied the rights that their counterparts at UIC exercised during their recent strike. A notable conservative victory, the Yeshiva decision remains one of the biggest obstacles to a concerted defense of the notion that higher education is a public good.

The university of today bears little resemblance to the "community of scholars" of yesteryear. Education has become "big business," and the task of operating the university enterprise has been transferred from the faculty to an autonomous administration, which faces the same pressures to cut costs and increase efficiencies that confront any large industrial organization. The past decade of budgetary cutbacks, declining enrollments, reductions in faculty appointments, curtailment of academic programs, and increasing calls for accountability to alumni and other special interest groups has only added to the erosion of the faculty's role in the institution's decision-making process.

Far from being the analysis of a tenured radical, this was the view expressed by William J. Brennan in his dissenting opinion in the Yeshiva case. To Brennan, one of the greatest liberals to sit on the Supreme Court in the twentieth century, the organization of faculty members at both public and private institutions seemed a natural response to the growing need of academics to find a place in an increasingly bureaucratized environment. And he was not alone. Indeed, Brennan referenced a 1973 Carnegie Commission on Higher Education report that noted the growing strains that the evolution of the university put on academic ideals and declared that “Faculty members should have the right to organize and bargain collectively if they so desire.”

But Brennan lost this argument. In Yeshiva, the Supreme Court held that in most cases faculty members at private academic institutions were not “professionals” covered by the National Labor Relations Act, but “managers” devoid of substantive rights. In the aftermath of the strike conducted on February 18-19 by the  UIC, United Faculty (UICUF) Local 6456 to speed up stalled negotiations with the university administrators over the status of adjunct faculty, it’s worth understanding why.

The Yeshiva case arose out of the refusal by Yeshiva University administrators to bargain with the faculty union, which petitioned the NLRB for an election 1974. The NRLB accepted the petition, noting that the faculty at Yeshiva were “professionals”, that is, they engaged in duties and responsibilities -- course selection, deciding course content, teaching methods, grading policies and student admission -- routinely associated with their profession.

Yeshiva administrators, in contrast, contended that the faculty were in fact akin to “managers” or “supervisors” -- a large group of workers (today numbering some ten million) to whom American labor law offers no protection because they are endowed with a measure of autonomy, discretion, and decision-making power. Barred from joining unions, these workers are supposed to cast their lot with higher management and eschew the type of collective action on which blue-collar unions once thrived.

Underlying this legal distinction is the conservative notion that in many cases, unionism is incompatible with the faithful performance of duty. Since the adoption of the Wagner Act, corporate America has insisted that it needs a reliable cadre of managers whose loyalty to the organization is not compromised by membership in a union that does not fully sustain business values. “A man can’t serve two masters”, they repeatedly argued as they opposed NLRB decisions extending bargaining rights to foremen and supervisors. As I show in my new book, The Employee: A Political History, the loyalty argument,although first put forth in the corporate battle against foremen’s unions in the 1940s, was gradually extended to many white collar workers, and by the 1970s, as faculty members started organizing, it resurfaced in the field of higher education with devastating consequences.

While it is often said that the Yeshiva case revealed how difficult it is to adapt the framework of the Wagner Act to a non-industrial setting, what this case yielded was in fact a highly ideological ruling compromising academic freedom. Tellingly, the task to overturn the NLRB ruling in Yeshiva fell to none other than Justice Lewis Powell, the author of the now infamous 1971 memo entitled “The Attack on the Free Enterprise System.” To Justice Powell, there was no difference between university professors and high-grade managers in a private company. “To the extent the industrial analogy applies,” he explained, “the faculty determines within each school the product to be produced, the terms on which it will be offered, and the customers who will be served.”

Powell never explained why the industrial analogy was apposite and why the unionization of faculty staff constituted a threat of “divided loyalty” for the university, but his opinion in Yeshiva was no doubt an important conservative victory, a key moment in the neo-liberal assault of the university. By ruling that professors were “managers,” Powell told faculty members that they could not fight the bureaucratization and marketization of the university because in fact they were caught within its web and owed loyalty to it.

Today, Yeshiva is still the law of the land, and in its wake the unionization movement at private universities quickly lost what impetus it had gained in the 1970s. By contrast, at public universities, unionization of tenured or tenured track faculty remained unimpaired.

Where are we some thirty-odd years later? The issues that surfaced in the 1970s have only grown more acute, and have spread even to public institutions. The strike led last week by the members of UICUF is a good guide. “We’re striking for the students”, explained two faculty members. “One of our issues in this strike is to take back decision-making power over the issues that matter to us -- curriculum, teaching conditions, the distribution of monies and the like,” they added. Indeed, what led to the two-day walk out, which gathered some one thousand protesters –faculty, students and supporters—in rallies and around the picket line, was a feeling of “voicelessness” as more than one year of negotiations by the union did not lead to a resolution and a contract.

More than a concern for a democratic university, however, led faculty of UIC to stand on the picket line for two bitterly cold days in February. Compounding this concern over the limits of the collegiality of the “shared governance” system is the more recent bread and butter issue of the compensation of full time adjunct faculty. Like many other schools, UIC employs a growing number of year-to-year, non-tenure track adjunct lecturers. According to a recent AAUP report, non-tenured-track positions grew 300 percent between 1975 and 2009, while tenure track positions only grew by 26 percent. The work of these “adjuncts” has become essential to most universities, and in fact many of them are in ranks that traditionally lead to a consideration for tenure.

Yet this work is poorly compensated. There again, UIC seems a good example. There, the income of adjuncts hovers around $30,000 a year -- less than half the median salary of all faculty in the whole UIC system ($65,000). This is a striking inequality that the public nature of the university makes even more arresting. In the U.S. as in Europe, public universities -- once viewed as engines of social emancipation -- are now incubators of contingent labor.

Neither of these two problems, of course, is limited to public higher education. The recent UIC strike, however, has highlighted the profound legal disjuncture that separates public and private universities, for in private institutions, those scholars who no longer believe in the principle of “shared governance” would no doubt find it hard to replicate the UIC strike because the Yeshiva decision has put them in a legal twilight zone.

While the UIC strike has put the unionism of faculty members front and center, it is thus necessary to remember that the Yeshiva decision stands as one of the main obstacles to any attempt to defend a university model where education is not entirely commodified and where humanities are not expendable. Indeed, the Yeshiva holding can hardly be reconciled with the long held idea that universities, like secondary schools, should produce a most desirable public good –an educated citizenry. In this respect, the distinction between public and private universities collapses, not simply because private universities largely benefit from public assistance in the form of student loans and research grants, but also, more simply, because they are equally invested in providing American students with the knowledge and know how to become citizens and workers. It is doubtful whether this task can be achieved if universities are not run with a healthy dose of bargaining with the workers, whether university professors or school teachers whose work has a civic dimension essential to society.