Why the U.S. Has So Many Bases on Okinawa

John W. Dower is emeritus professor of history at the Massachusetts Institute of Technology. His books include Empire and Aftermath: Yoshida Shigeru and the Japanese Experience, 1878-1954 (1979); War Without Mercy: Race and Power in the Pacific War (1986); the Pulitzer Prize-winning Embracing Defeat: Japan in the Wake of World War II (1999); Cultures of War: Pearl Harbor / Hiroshima / 9-11 / Iraq (2010); and two collections of essays: Japan in War and Peace: Selected Essays (1994), and Ways of Forgetting, Ways of Remembering: Japan in the Modern World (2012). 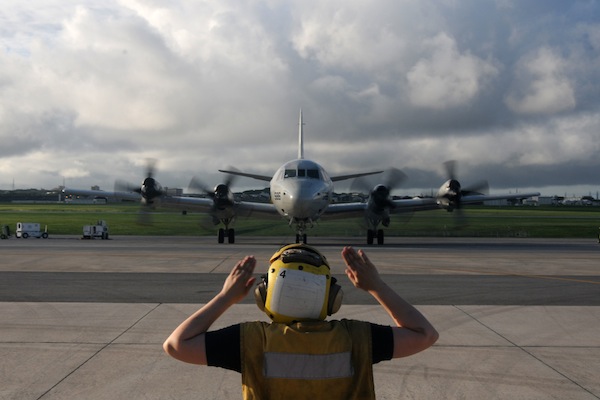 Editor’s note: This is part of a multi-part series on the legacy of the San Francisco Treaty system. The series is adapted from “The San Francisco System: Part, Present, Future in U.S.-Japan-China Relations,” published in The Asia-Pacific Journal http://japanfocus.org/-John_W_-Dower/4079. The article is itself adapted from John W. Dower and Gavan McCormack’s book "Japan at a Turning Point—Pax Americana? Pax Asia?," published in Japanese by NHK Shuppan Shinsho in January 2014.

The conservative government led by Prime Minister Yoshida Shigeru that negotiated Japan’s acceptance of the San Francisco System faced a fundamentally simple choice in 1951. In return for agreeing to Washington’s stipulation that a multinational peace treaty had to be coupled with Japanese rearmament, continued U.S. bases in Japan, and exclusion of the PRC from the peace conference, Japan gained independence plus assurance of U.S. military protection. In the real world of power politics, the alternative that Yoshida’s liberal and leftist domestic critics endorsed -- namely, to insist on Japan’s disarmed neutrality in the Cold War and a non-exclusionary “overall” peace treaty -- meant postponing the restoration of sovereignty and submitting to continued U.S. military occupation.

Even Yoshida’s staunchly pro-American and anti-communist supporters in Japan expressed anxiety about the price to be paid for agreeing to Washington’s demands. Acquiescing in the non-recognition and isolation of the PRC was unpopular, especially in business circles. The uncertain future scale and disposition of post-occupation U.S. bases throughout the nation was worrisome. And Washington’s demands that Japan rearm rapidly were deemed short-sighted and foolhardy. Precipitous remilitarization, Yoshida and others argued, would provoke major opposition both domestically and among the recent foreign victims of Japanese aggression. (1)

Despite such reservations, the government and most of the populace welcomed the 1951 treaties and ensuing restoration of sovereignty; and, by and large, this Cold War settlement continues to be applauded in mainstream Japanese and American circles. The reasons why are not far to seek. The peace treaty itself was non-punitive and generous to Japan. And the U.S.-Japan military relationship has remained the cornerstone of Japanese strategic and diplomatic policy to the present day. Under the San Francisco System, Japan has established itself as a democratic, prosperous, and peaceful nation.

Rather than viewing the San Francisco System as an unmitigated blessing, however, it is necessary to recognize the many specific ways in which it has become a straitjacket -- a system that locked Japan into policies and attitudes that have become more rather than less problematic with the passage of time. The “blessing” and the “straitjacket” are not mutually exclusive. They coexist, and call attention to intractable contradictions that have been inherent in the system since its inception.

Just one of the tragic legacies of World War II and the early Cold War -- and the San Francisco System -- was the creation of divided countries -- notably Korea, Vietnam, Germany, and China. In a perverse way, the San Francisco System made Japan another divided country by detaching Okinawa Prefecture, the southern part of the Ryukyu Islands chain, from the rest of the nation and turning it into a U.S. military bastion.

This was not a tragedy on the scale of the other divided countries. It was, moreover, a territorial partition that involved Tokyo’s close and even avid collusion with Washington. In American eyes, Okinawa became an indispensable “staging area” for U.S. forces in Asia from the moment the war ended -- a policy that the Soviet atomic bomb, the Communist victory in China, and the outbreak of the Korean War all hardened beyond any possible challenge. To Japanese policymakers, Okinawa and its residents were simply an expendable bargaining chip. Well before the San Francisco conference, planners in Tokyo began drawing up proposals to sacrifice Okinawa if this would hasten the restoration of sovereignty to the rest of Japan. (2)

The San Francisco settlement formalized this policy by excluding Okinawa from the “generous” peace terms. The prefecture remained under U.S. administration, with only “residual sovereignty” vested in Japan. During the Korean War, B-29 Superfortress bombers (which only a few years earlier had firebombed the cities of Japan) flew missions to Korea from Okinawa’s Kadena Air Force Base. Between 1965 and 1972, Okinawa was a key staging area for the devastating U.S. air war against North Vietnam as well as the secret bombing attacks on Cambodia and Laos. Although administration of Okinawa was restored to Japan in 1972, after twenty-seven years of direct U.S. control, this did not diminish the prefecture’s role as the centerpiece of America’s forward military posture in Asia.

The original professed rationale for maintaining an extensive network of U.S. military bases in Japan -- as elsewhere throughout the world—was defense against a perceived threat of communist aggression directed by Moscow. Following the collapse of the Soviet Union in 1991, the United States vacated around sixty percent of its overseas bases. Following the invasion of Afghanistan in 2001 and Iraq in 2003, it constructed many hundreds of new facilities in the Middle East, before dismantling most of them as it prepared for withdrawal in the 2010s. Still, America’s worldwide “empire of bases” is today more extensive than ever before. U.S. military personnel are stationed in around 150 foreign countries, and reasonable estimates place the total number of overseas U.S. military sites at over 1,000 -- some of them enormous, some of them small, and increasing numbers of them secret and engaged in covert activities. (3)

U.S. bases in Japan must be seen in this larger context. They are rooted in the occupation of Japan and the ensuing Cold War, with their ongoing presence being formalized in the 1951 security treaty and subsequent bilateral agreements. At the same time, they are but one small part of an American military empire that has taken on a new post-Cold War momentum. In current scenarios, China is a major projected enemy.

The on-going impact of this “two-Japans” policy operates at many levels. Most obvious is the degradation inevitable in any such gargantuan military-base milieu, including GI crimes, noise pollution, and environmental destruction. Less visible is the institutionalized practice of non-transparency, duplicity, and hypocrisy by both the U.S. and Japanese governments—as seen in revelations of secret activities and agreements involving storage on Okinawan soil of both nuclear weapons and chemical weapons such as Agent Orange. (4)

Most pernicious of all, perhaps, is the shameful spectacle of a government that has consigned a specific portion of its land to extensive military use by a foreign power, and simultaneously treated its populace there as second-class citizens.

Preserving the peace in Asia and the Pacific through multinational security agreements is obviously an essential endeavor, but past experience under the Pax Americana indicates how destructive this may become in actual practice. It is not plausible that Japan’s hypothetical enemies—the Soviet Union and China in the Cold War, China and North Korea today—have ever really posed a serious threat of unprovoked armed attack on Japan, as the rhetoric in the original security treaty implies. On the other hand, there can be no doubt that the continued presence of the bases ensures that in the future, as in the past, Japan will have no choice but to become a participant in America’s global military policies and practices, even where these may prove to be unwise and even reckless.

(1) The third distinguishing feature of the San Francisco settlement (alongside the Cold War setting and “separate peace”) was the “unequal treaty” nature of the bilateral U.S.-Japan security treaty. As Secretary of State Christian Herter told a Senate committee when the treaty came up for revision in 1960, “There were a number of provisions in the 1951-1952 Security Treaty that were pretty extreme from the point of view of an agreement between two sovereign nations”; U.S. Senate, Committee of Foreign Relations, Treaty of Mutual Cooperation and Security with Japan, 86th Congress, 2nd Session (June 7, 1960), esp. 11-12, 27, 30-31. This gross inequality provoked considerable tension between Tokyo and Washington in the 1950s, prompting revision and not just renewal of the treaty in 1960. Various backstage exchanges and commentaries on this issue are included in Department of State, Foreign Relations of the United States, 1958-1960. Japan; Korea, vol. 18; see 23-29 for a representative expression by the U.S. ambassador in Tokyo of U.S. apprehension concerning “the stigmas and disadvantages now associated in Japan with the present Security Treaty.”

(2) Nishimura Kumao, who played a leading role in Japanese planning for the restoration of sovereignty, details the evolution of post-war strategic projections, including Okinawa, in his illuminating San Furanshisuko Heiwa Jōyaku, vol. 27 in Kajima Kenkyūjo, ed., Nihon Gaikō Shi (Kajima Kenkyūjo, 1971). As early as September 1947, a letter from Emperor Hirohito himself was delivered to General Douglas MacArthur, the supreme commander of Allied occupation forces, proposing that Okinawa be leased to the United States for twenty-five or fifty years, or “even longer,” to support the struggle against communism and hasten the end of the occupation. The letter was uncovered by Professor Shindō Eiichi and reported in “Bunkatsusareta Ryōdo,” Sekai, April 1979, 31-51 (esp. 45-50).

(3) The concept of an American “empire of bases” was introduced by the late Chalmers Johnson in The Sorrows of Empire: Militarism, Secrecy, and the End of the Republic (Metropolitan Books, 2004). For an informative recent overview, see David Vine, “The Lily-Pad Strategy: How the Pentagon Is Quietly Transforming Its Overseas Base Empire and Creating a Dangerous New Way of War,” posted online in July 2012 at Tom Dispatch.

(4) The major investigative work on Agent Orange and other toxins in Okinawa has been conducted by Jon Mitchell. See his “US Military Defoliants on Okinawa: Agent Orange” and “Agent Orange on Okinawa -- New Evidence,” both in volume 9 of the The Asia-Pacific Journal (September 12, 2011, and November 28, 2011, respectively); these are accessible here. See also Mitchell’s articles in Japan Times: “Agent Orange ‘tested in Okinawa’” (May 17, 2012); “25,000 barrels of Agent Orange kept on Okinawa, U.S. Army document says” (August 7, 2012); and “U.S. Agent Orange activist brings message of solidarity to Okinawa” (September 15, 2012). Secret agreements on nuclear issues are discussed and annotated below under “The ‘Nuclear Umbrella’.” The most detailed and incisive critical commentary on Okinawa in English appears in various publications by Gavan McCormack, including most recently his co-authored (with Satoko Oka Norimatsu) Resistant Islands: Okinawa Confronts Japan and the United States (Rowman & Littlefield, 2012).