Market Values Are Not MOOC Values

by Louis Hyman and Edward Baptist 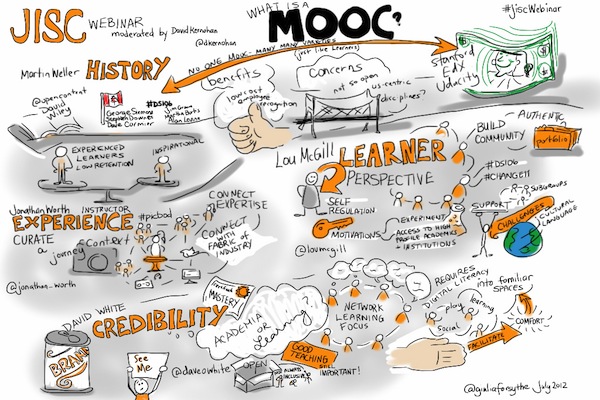 If, as the New York Times claimed, 2012 was the Year of the MOOC (Massive Online Open Course), then 2013 was the Year of Pushback Against the MOOC. The point versus counterpoint played out according to a predictable script.

First right-wing entrepreneurs, who see American universities as a nest of inefficient yet arrogant tenured radicals, proclaimed that higher education was a "bubble." Traditional universities, they announced, would be rendered extinct by the MOOC-as-category-killer, which could deliver a free product to consumers around the world.

Academics fired back, insisting that taped lectures, multiple-choice questions graded by algorithm, and troll-filled discussion threads were no substitute for actual human beings. As results from the road-testing of MOOCs started to trickle in over the second half of 2013, the critics proclaimed victory. Typically, less than ten percent of students who initially signed up for such "courses" completed them.

We--two historians who are preparing to launch one of Cornell's first MOOCs, American Capitalism: A History--think that both sides are wrong. MOOCs can transform higher education--by strengthening universities in ways that decrease the cost of education and enhance the role of traditional teaching. These transformations promise improved education, both for college students, and for everyone who wants to learn more. Either/or apocalyptic thinking has blinded academics to the possibilities inherent in the MOOC concept. MOOCs can't replace traditional classrooms, but they can turn the classroom back into the realm of discussion and active learning that the defenders of traditional education say it should be--yet too rarely is.

Let's start with how MOOCs can transform the traditional college classroom. We found that just as exciting as figuring out how to communicate half a millennium of human experience, from slave plantations to container ports, was the process of thinking about the MOOC's form. We discovered that MOOCs--previously seen as a way to convey technical knowledge--are just as useful for the humanities as they are for the STEM fields.

The essence of a humanities education, whether in history, literature or philosophy, is critical conversation. You can't have a debate, however, unless students have gained actual knowledge to discuss. Traditionally, professors have used two methods to impart that knowledge: the lecture and the textbook. But while some lecturers are great, too often lectures are simply boring. Students end up transcribing from PowerPoint rather than thinking about the material. Worse than that, the use of lectures as the main way of imparting knowledge leads students to think of education as simply a one-way transfer of facts from professor's mouth to their passively receptive brains.

In recent years, educational reformers have championed the "flipped classroom." Content learning takes place at home and the classroom is for discussion. Lecture halls are replaced with seminars. Flipping classrooms is hard, however, because students too often don't have much to replace the lecture except textbooks. And textbooks are even worse than lectures. Even the ones that aren't dry, one-sided, or out-of-date are simply too damn expensive. If the MOOC is a category-killer, the dinosaurs who need to watch out for meteors are the corporations that have grown rich by publishing college textbooks that often cost over $200 per copy. Given that students--and often professors--don't get to choose what textbook to use, it isn't surprising that the conglomerates who control textbook publishing jack up prices every year, while producing slightly modified "new" editions that block any encroachment on their sales from the resale of used copies.

The MOOC, in our view, is the ideal way to flip the classroom, replacing both the lecture and the textbook. Whether they build their own content or draw on an existing MOOC, professors can off-load content to on-line formats and spend face-to-face time interacting with students. Students will actively debate history -for instance--rather than transcribing the professor's lecture. Universities will not be destroyed, only lectures, and in their demise better conversations will happen.

But what about the nontraditional student, who will not encounter the MOOC in the context of a course at a university or college? We are not terribly surprised that MOOCs thus far have had low completion rates, for they have been framed as a way for individuals to learn in isolation. Yet education has always been a collective pursuit--whether in a formal classroom or in a monthly book club--because groups create reciprocal obligations. Athletes don't let down their teammates. Borrowers in a microcredit lending circle help each other repay their debts. Reciprocal obligations help people to stick to difficult tasks, like learning things that are new and challenging. The failure of MOOCs is not the absence of professors, it is the absence of classmates.

The failure of MOOC completions comes from the failure to provide good support for group participation, both virtual and real. As much as the classroom should be an inspiration for MOOCs, the more accurate model for those who aren't students in traditional colleges and universities is the book club. Book clubs exist because people actually like to have intelligent discussions. They emerge naturally out of our basic institutions: churches, libraries, unions, workplaces, neighborhoods, etc. Would having a professional teacher, in the form of common enrollment in a MOOC, produce "better" learning outcomes? Probably. A professor, like any professional, knows their craft better than the average person. But book clubs aren't just about maximizing knowledge--they are about the experience of learning together. While standalone MOOCs might someday provide certification in some fields, we believe that education can be an end-in-itself.

We aren't naïve--particularly about making money in capitalism. There is profit to be made in MOOCs, but it lies in concierge services that provide convenience and further enrichment, not the MOOC itself. For students who want to learn more or have their learning recognized, there will be costs in the form of custom readers and (eventually) accredited testing. Still, we think that to unbundle the costs of education is a good thing. Students who just want to take the MOOC and talk about it with their MOOC club can do so, and students who want to pay something for additional services can do so as well. The either/or model of either being a "real" student or nothing no longer applies. Education can take place on a spectrum, as it should.

For the two of us, understanding capitalism's arc of growth and inequality over the past few centuries matters tremendously. And now is the time when we desperately need to learn. Economists' models, which proclaimed the magic of the unfettered market, failed disastrously in the recent crisis. People have been reminded of just how much economic institutions, policy choices, and human foibles can wreck everyone's lives. Those who have suffered through bubble, crash, recession, and choked growth are hungry for different explanations of why the world works the way that it does.

MOOCs offer a tremendously promising way to communicate about pressing ideas with a broad audience. In one semester the two of us can teach, at most, a few hundred students at Cornell. Indeed, all of our Cornell colleagues combined could teach a few thousand. But in a MOOC we can reach tens of thousands, all around the world, for free. Commuters can listen to the podcasts of our lectures, or even watch the lectures on their phones during a coffee break. Education can be flexible, and it can bring people together--sometimes in classrooms, but often or even most of the time somewhere else.

So rather than a triumph of individualistic, market values, the MOOC represents a democratic way to raise collective education. Rather than creating a uniform product consumed in isolation, MOOCs are more likely to restore critical conversations to the classroom--and the book club. Rather than disempowering faculty members and universities, MOOC technology can give them greater reach while eliminating inefficiencies that profit nobody except for a few corporate behemoths. MOOCs can support a flipped classroom inside the university and democratic education outside the university. Thus academics, students, and people in general shouldn't hopelessly pine for a past before anyone thought of a MOOC. Instead, we should figure out how to use MOOCs to help make a future that fits our democratic values.

Follow the discussion and see sneak peak videos on: https://www.facebook.com/AmericanCapitalismMOOC