Tim Roberts is the author of Distant Revolutions: 1848 and the Challenge to American Exceptionalism (Virginia, 2009), and is a U.S. Fulbright lecturer in American History at Zhejiang University, Hangzhou, China. The views in this essay are his own and do not reflect those of the Fulbright Program or Zhejiang University. 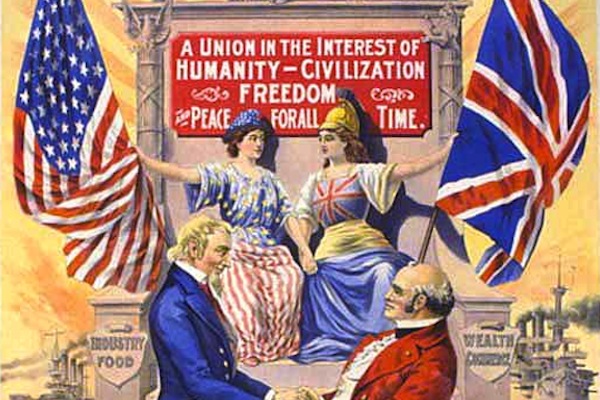 Originally published by The Diplomat.

Obviously there are differences between the Anglo-American relationship 175 years ago and Sino-American relations today. Then there was no United Nations, no Kyoto Protocol, no World Trade Organization, and no Nobel Peace Prizes. If there was any international “law” it was largely the British Empire’s declarations for a balance of power in Europe, equal European access to colonial development of Africa and Asia, a cap on European colonial possessions in the Americas (tacitly ensuring the U.S. Monroe Doctrine), and an end to the African slave trade. The British Navy enforced these policies. The world today is more multilateral than in the mid-nineteenth century.

Likewise, China today does not act as a U.S. agricultural colony. Before the Civil War, slave-grown cotton, half the value of all American exports, was the vital raw material that enabled British industry to take off. China today provides a variety of finished goods to American consumers at lower prices than if they were made elsewhere, is the leading foreign holder of U.S. debt, and is an industrial power.

Yet there are some important similarities between the two relationships. Late in the nineteenth century the Anglo-American “special relationship” took shape, built on a century of American esteem of British culture. Six of the first fifteen U.S. presidents spent time early in their careers in Britain, educating them about British ways, different from much of China’s ruling elite’s experience of the United States only from afar. Besides this, though, many nouveau riche Chinese people today cross the Pacific and enjoy downloading Desperate Housewives and The Walking Dead, postmodern versions of ambitious Jacksonian Americans’ tours of Britain and reading their Shakespeare and Dickens.

But during the early republic many if not most Americans considered Britain as a threat to American commerce and sovereignty. The U.S. declared war on Britain in 1812, frustrated over British troops lingering around American borders after the Revolution and British interference with American maritime trade. A half-century after the War of 1812, Britain recognized the belligerent status of the Confederacy, and British businesses conducted a flourishing trade with the rebel states. British military supplies indeed probably prolonged the American Civil War. As illustrated by the outcry over the American, Japanese and South Korean rejection of China’s announcement in November 2013 of a new Air Defense Identification Zone (ADIZ), many Chinese people today resent American interference with China’s declarations of sovereignty, and suspect American motives.

Economic conditions also show similarities. Though well below the Chinese annual growth rate the last half-century, the U.S. economy developed rapidly across the nineteenth century: the American economy came level with the British economy around 1900. And while the U.S. remained largely agricultural, by the 1850s New England was cranking out cheap clocks, guns and textiles, based on British prototypes. American commentators’ complaints today of Chinese disregard for U.S. copyrights echo British complaints in the past.

The aspect of the Anglo-American relationship in the first part of the nineteenth century most salient to the Sino-American relationship today is that Britain remained America’s largest trading partner despite the U.S. maintenance of labor practices -- slavery -- which Britain opposed. Parliament outlawed British slavery in 1833, but Britain continued to import American slave-grown cotton. One might expect that as a global naval power, with a public nervous about the surging economic power of a rival nation, and an official policy condemning that rival’s labor practices, British policymakers might have taxed slave-produced cotton, stopped ships carrying slave cotton from docking in the Empire, or directed investment in alternative supplies (they eventually did so, but only after the U.S. navy blockaded the South). None of this happened. In fact after the British abolition of slavery, Britain continued to buy about two-thirds of all American cotton, and the United States supplied three-fourths of all the cotton that British manufacturers turned into clothing, thus keeping nearly 15 percent of the British workforce employed in textile mills. In other words, through the American Civil War, trade trumped human rights in British foreign policy.

A similar pattern may be emerging in the modern era. In October 1992 presidential candidate Bill Clinton criticized President George Bush for not pressuring the Chinese government on human rights issues, but as president Clinton supported China’s Most Favored Nation trading status, a decision he called principled and pragmatic. Likewise the administration of George W. Bush did not much pressure China on human rights, nor has President Barack Obama. At a meeting in Washington with President Hu Jintao in January 2011, Obama, the 2009 winner of the Nobel Peace Prize, reminded audiences that China was holding the 2010 winner of the prize, Liu Xiaobo, in prison. But after Obama debated Mitt Romney in October 2012 the Sino-American expert Zhu Feng of Peking University concluded that both president and challenger cared mainly about trade issues. And at a June 2013 summit meeting with President Xi Jinping, Obama raised issues of cyber-crime, North Korea and pollution, but not civil rights.

The United States in the nineteenth century struggled not only with slavery but also the disenfranchisement of women and Native Americans. China in the coming years will grapple with its own contradictions. Recent popular uprisings in Cairo and Kiev strike observers in Beijing like the democratic upheavals of Europe in 1848 appeared to conservative Americans then jittery about the risks of liberal reform. But Chinese leadership would make a mistake not to anticipate American accommodation and compromise, and to risk conflict through militarization, as the German Empire did in spiraling towards World War I. The ADIZ may not be China’s version of the Monroe Doctrine, but America’s current dependence on the Chinese export economy and the nature of the Sino-American relationship as a new rivalry of global powers and coming economic equals resembles the Anglo-American relationship through the Civil War era. If this analogy holds, conflict between the two powers may be avoided as Americans pursue the China trade and U.S. policy sticks to the principle of noninterference in China’s “peculiar institutions.”