The Politics and Popularity of "Downton Abbey"

by Gregory Kosc and Kallie Kosc 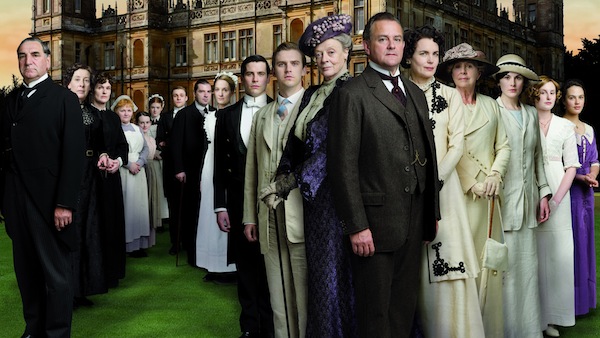 On the surface, it isn’t hard to imagine why Downton Abbey has received so much critical and popular acclaim in the states. The show’s ability to recreate a visually stunning and overly-dramatic version of early twentieth-century Britain has captured the attention of many cultural commentators, all of whom tend to use these qualities to explain how Americans hunger for escapism and le happy end. Of course, there is no denying the spectacular production quality, or the neatness with which some plot lines are resolved. That said, this reasoning seems reductive and doesn’t give enough intellectual credit to American viewership, nor does it take into account our current economic and political climate.

Tellingly, in an era of incredible partisanship and divisive rhetoric, the program is popular across the political spectrum. And, beyond production value and drama, Downton allows people from across the socio-economic and political spectrum to see their values legitimized through the storytelling process. Take Lord Grantham into consideration. Throughout the first three seasons, the audience becomes acquainted with Grantham through the running of his estate and his relationships with his servants and family. He is presented as both the conservative ideal of a benevolent “job creator” and a socially-conscious liberal. When the estate’s fortune is lost, it is clear that without Grantham’s patronage and support, the entire village would suffer. As concerned as he is for his own family’s livelihood, his duty to the people of the village weighs equally heavy on his mind. Indeed, he paternalistically resists the transition to the unforgiving free market out of loyalty to his tenants and villagers. So while Grantham represents the 1 percent and everything the Occupy movement railed against, he also embodies the ideal of an enlightened elite that liberal Americans so desperately crave for today, particularly amidst a financial crisis liberals argue was brought on primarily by our own golden-parachute jumping CEOs. Conservatives, on the other hand, see in Grantham a prime example of how money trickles down to the common man as well as the inescapability of the free market. This storyline exemplifies the benefit of having wealth at the top and serves to humanize the burden that comes with the responsibility of wealth -- a burden at which liberals would normally scoff. In the end, Grantham’s version of social welfare loses out to the need to embrace the free market, but this transition did not take place without resistance and painstaking consideration of the village as a whole.

The daughters of the house and their experiences also engender likability and repulsion. Not only do their actions reconcile different ideologies, but their historical experiences also occasionally transcend politics. Lady Sybil is the logical representation of liberal values. She defies aristocratic convention through engaging in politics, supporting suffrage, and marrying the chauffeur. Even more poignant and timely is the storyline resulting in her death. Decisions regarding her health are taken out of her charge and placed into the hands of men. In the wake of the recent all-male congressional hearings on contraceptives, the failed campaigns of Todd Akin and Richard Mourdock, and the more recent dustup over Planned Parenthood funding in Texas, women’s health issues, and men’s control over them, are still very much in the headlines. In Sybil, liberals see the potential consequences of having men who are largely ignorant of women’s needs making medical decisions for them. Yet, even Sybil’s story, has elements that make her acceptable to conservatives. In Sybil there is no unthinking rejection of her family and their values. In fact, Sybil defends her family when Branson dares question them, and she genuinely wants to come to an understanding with her father regarding her choices. Furthermore, her decision to marry beneath her class and renounce her inheritance shows her acceptance of egalitarianism and meritocracy -- concepts many conservatives hold dear. Eventually, a common ground is found when a dinner jacket is placed on Branson’s back. This change is no wardrobe malfunction, and the moment is laden with symbolism. Her commitments to family and home add a conservative layer to her character.

While the characters and plot lines offer viewers a chance to reconcile their varying political perspectives, the show similarly plays into differing extant versions of American nationalism and our relationship with Britain. Even as many Americans view the British as more sophisticated (it’s the accent), we have always been in competition. The suffrage issue, which looms so large in the family’s politics and in the daughters’ lives, is a transcendent issue to Americans in 2013. And, as the show makes clear, the United States beat Britain to full suffrage for women. This accomplishment is something Americans can take pride in, and there are multiple storylines which serve to bolster Americans’ esteem. For instance, when the bill eventually comes due for the family, Lady Grantham’s (Cora’s) Americanness is on full display and she proclaims “have gun, will travel.” When the hard decisions are made to ensure the future of the estate, it is the middle-class sensibility of Matthew and Cora’s support of his schemes that carry the day. Cora continues to be a pillar of American values in the episode resulting in Sybli’s death. Cora is not impressed by Sir Philip’s title and defends the concerns of the humble village doctor who has known her children from birth. Business acumen and pragmatism are traits that Americans like to associate with themselves, and Cora has these qualities in spades.

One might think that the presence of Cora’s brash American mother, Martha, might serve to embarrass Americans. But, on the whole, Martha offers a way for Americans to reconcile some nationalistic issues. Martha mocks the deference and formality of Downton at every turn. While base, she’s clearly pragmatic and modern. One could argue that even Martha’s ugly American routine gives the American audience an opportunity to indulge in, and then reconcile, a lingering and collective inferiority complex. (1) Some American viewers might see Martha’s behavior as indicative of Americans’ bumptiousness, both past and present. By recognizing such insensitive behavior, this might comfort them in thinking that such stereotypes certainly do not apply to them. Of course, others might take pride in seeing the American strip Downton of its pretensions. By simultaneously recognizing her modernism and crudeness, Americans can reassure themselves about their eventual cultural dominance and disavow or celebrate Martha’s lack of tact. Overall, Americans are portrayed as more forward-thinking, pugnacious, and progressive, all of which serve as a reassuring confirmation that as Americans we are almost always adaptable and on the right side of history. Every historical period is rife with hardship and change, including our own, and perhaps seeing Cora (and Martha for that matter) unflinchingly confront such change and question the senseless aspects of position and rank fills viewers with the confidence that it is in our nation’s DNA to tackle and adapt to that change.

The show’s setting seems to deceive critics into thinking that Americans couldn’t possibly see parallels to our own society in the formality and rigidity of the British class system. However, the average American viewer, who is most likely college-educated, would be able to see the parallels between the early twentieth century and our own time. The massive gaps in wealth, pressing gender/sex issues, and the disruptions of war that drive the stories surrounding the house can be read as a microcosm of twenty-first-century American society. These are all problems that continue to resonate with Americans and fuel our politics, giving viewers an opportunity to question and reconcile their own political and social agendas. And, while those with partisan views can certainly find support for their respective ideologies in different characters and situations, as we hope this article has demonstrated, it is also worth pointing out that no character is a distillation of any one perspective. Perhaps this means that even as our media and rhetoric have served to increasingly divide us with inane sound bites about “flip flopping,” there are still many Americans who recognize that few of us are ideological archetypes. Furthermore, the show’s implicit pro-American elements allow the American viewer to harken back to a time when we believed ourselves to be the undisputed “good guys.” With the moral relativities inherent in the War on Terror, the economic meltdown, and a dysfunctional political system, America’s future as a great “super power” and world leader is questionable in the minds of many Americans. Downton Abbey reinforces our accepted (if not always practiced) American values and offers us an opportunity to take pride in our collective past in an era when our collective future is in doubt. Perhaps the critics are partially correct; escapism does play a role in the show’s success, but it has far less to do with sets and cinematography and far more with the need Americans have for national pride.