The Cotton Club of 1932 Returns with a Roar 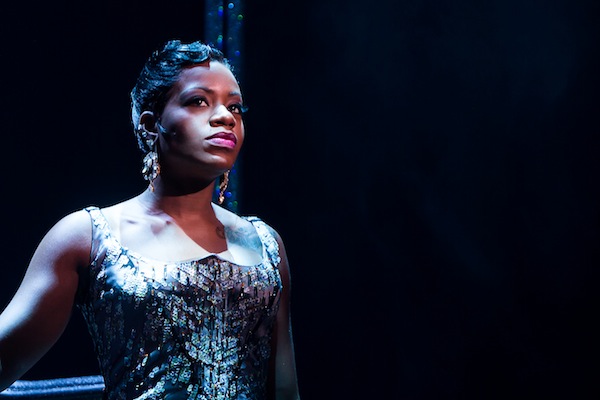 Two years ago, musician Wynton Marsalis and the Jazz at Lincoln Center All Stars, along with director Warren Carlyle, staged a revue about Harlem’s fabled Cotton Club during the Depression. The colorful, lavish show had a short run at City Center and earned strong reviews. It is back now, on Broadway, in fuller and richer form as After Midnight, and it is dazzling.

The show, that stars Dule Hill and Adrianne Lenox, with a guest appearance by Fantasia Barrino, recreates the legendary floor show at the Cotton Club in 1932, with its singers, dancers and tall, gorgeous show girls. It is full of vitality and electricity and explains why the Cotton Club was such an entertainment mecca. This latest version of the show has a much larger orchestra that is given prominence on the stage and in the show, a bigger cast, more dance numbers and a better staging.

The show is loaded with sizzling numbers that made swing music famous eighty years ago but it is also full of very funny stage bits.

Performers hold large red balloons on strings as they glide about the stage singing I’ve Got the World on a String. Lenox steals the show early on when she smirks and bounces her way through Women Be Wise, a song about how to hold on to your man, and Go Back here You Stayed Last Night. She is hilarious.

There are several nods to the traditional night club singer of the 1930s, such as Fantasia belting out I Can’t Give You Anything but Love, a slow, sultry Stormy Weather and a truly majestic rendition of On the Sunny Side of the Street. There are five gifted male dancers, dressed in shimmering white tuxedoes and top hats, who dance their way through the show, gliding about in perfect syncopation. There are many sprawling musical numbers that involved most of the cast, such as the Cotton Club Stomp. The dances in the show are far better than those in the 2011 production.

Unfortunately, the only real history in the show is the old Cotton Club sign and 1930s costumes. Sadly, you learn nothing about the Cotton Club, which was a musical legend in America, a nightly watering hole for the rich and famous with tables full of movie stars and sports figures. The trendy club has been the subject of numerous books, novels, plays, documentary films and several feature films. Its alumni included Duke Ellington, the Nicholas Brothers and Lena Horne. It was run by gangster Owney Madden, who at first managed the club with black entertainers and white audiences. The night spot was packed just about every evening and it introduced dozens of entertainers to the world. Ellington finally talked Madden into integrating the Cotton Club and when he did business boomed. Ellington became so famous there that he was able to take his band on national tours and became a show business icon.

The club, opened in 1924. It closed in 1935, after the Harlem riots. It re-opened in midtown Manhattan, far from Harlem, a few years but had lost its luster. The Cotton Club shut its doors a few years later, after its celebrated founder, gangster Madden, was sent to Sing Sing prison, but doing no singing.

Carlyle did a wonderful job as both director and choreographer of After Midnight. Even though he had a revue with no storyline, and little mention of the background of the Cotton Club, he certainly evoked the night club scene in Harlem during the Depression with his work. Theatergoers should not be put off by the review rather than a full book musical; After Midnight is a jewel.

Carlisle received fine work form his cast. Hill, known primarily as an actor, did a fine job as a song and dance mad, working on his own or with the ensemble. Lenox was a mad hatter wonder as the howling, scowling woman warning women to watch out for the men in their life. Fantasia did her star turn well, bringing the house down in every one of her numbers, all of which were superbly staged.

Even without an historical storyline about a club that certainly cried out for one, After Midnight is a winner for bringing Harlem’s Depression jubilant night life back to life. See it.