A Honeymoon in Vegas? Yes, Please. 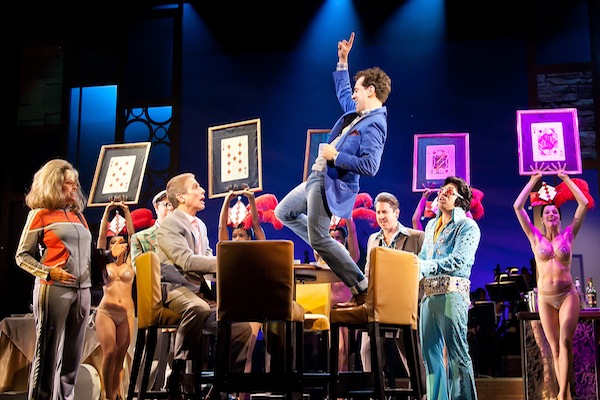 This is not your grandpa’s Las Vegas.

Honeymoon in Vegas is a sensational new musical based on the 1991 hit film of the same name. After its smash debut at the Paper Mill, where it opened last week, it is probably headed for Broadway. It will hit the jackpot there, too.

The refreshing musical follows the adventures, or misadventures, of a fumbling New Yorker named Jack Singer (Rob McCLure) who is love with a girl named Betsy (Brynn O’Malley). After a tedious five year engagement, he finally whisks her away to Las Vegas for a quickie marriage and honeymoon. They do not make it to the altar, though, because Jack lost $58,000 in a card game to classy, but mysterious, gambler,Tommy Korman (Tony Danza). Korman spotted the pair earlier and was stunned that Betsy looked exactly like his late wife, who died from sunning herself next to a casino hotel pool. He says he will let Jack off the hook for the money only if he gives Betsy to him for the weekend.

Jack reluctantly agrees. He tells Betsy and she erupts. She agrees to go, but only out of anger at Jack. The rest of the musical is a comedy of errors as Jack pursues Betsy and Tommy all the way to Korman’s estate in the lush Hawaiian Islands. The trio then races back to Vegas, where Betsy plans to marry Tommy after she heard about the real details of the card game. Jack, unable to get on their plane, hitches a ride with the “Flying Elvis” troupe of Presley imitators, who are hilarious. Elvis has not left the building).

The play is an absolute delight. It has wonderful music, glittery, very Vegas sets and a strong book, written by Andrew Bergman, the same man who wrote the movie. The bouncy music is by Jason Robert Brown. What makes it special, though, is the spectacular performances by Danza (the star of the television series Taxi and Who’s the Boss?), McClure, a gifted singer and dancer who played Charlie Chaplin last year in Chaplin, and Broadway veteran O’Malley.

McCLure is a non-stop wonder as Jack. He has an innocent, stunned look about him throughout the show that is utterly charming. He loves Betsy and realizes what a bad decision he made in giving her to Tommy. He works hard to get her back and you root for him all the way.

Danza is astonishing as Tommy. We all know he’s a fine actor, but most do not realize what a good singer he is. Danza’s dancing skills are minimal, but he has a larger than life stage persona that makes up for it. He has become a really successful crooner.

O’Malley has a striking singing voice and is a strong performer. Like McClure, she makes you love her and hope she gets back with McCLure by the end of the show.

Besides the three top stars, kudos to

The stars of this show have to be the marvelous “Flying Elvis’ crew who bop and hop their way around the airplane before leaping out the door.

History gets a serious, and really interesting, look in Honeymoon in Vegas because the Vegas of 1991, when the movie came out, is dramatically different from today.

The historic look of this show set in 1991 leans heavily on the reputation of Vegas a generation ago not just as a gambling capital, but as a city where lovers could get married right away in any of its several dozen express marriage, glitzy wedding chapels. It is shown in 1991 as a vibrant, successful city with glittery night clubs, a dazzling night life, high stakes poker games, big casino staffs and happy high rollers.

Most of that has changed over 22 years. It is no longer the town of fast marriages, even though most of the chapels are still there. Today, the old sin city has become a battered and struggling gambling capital because of the recession and intense pressure from hundreds of other casinos throughout the country.

Las Vegas, perhaps more than any other U.S. city, was crippled by the 2008 recession. Since then, visitors at McCarran Airport have dropped by nearly 30 per cent per year and the total Strip casino revenue has plunged 25%. The whole town has suffered. Unemployment soared from 5% in 1991 to nearly ten per cent in 2011 and is till at eight per cent. The housing market was stagnant for much of the last five years, although it has strengthened a bit lately.

The folks who work in Vegas and visit Vegas live in a different world now. In 1991 only two states had legal gambling. Today, 48 states do. Today, that are 140 Indian casinos and they take in over $27 billion a year. They all cut into Vegas’s gambling revenue, although it has inched up a bit in the last few years partially thanks to the many films and television series shot there.

And, too, today Vegas is a large, populated city with the successes and failures just like any other million plus city.

One big complaint about the show is that there were numerous opportunities throughout the story for many of the characters to tell the audience a little bit about the history of Las Vegas, one of the most famous cities in the world with a very unusual past. Its resort casino founding by gangster Bugsy Siegel? Howard Hughes’ empire there in the 1960s? Frank Sinatra and his Rat Pack? Mob influence in the ‘40s and ‘50s? The international gamblers? Big jackpots? The history of the wedding chapels? Liberace? Elvis shows at the Hilton? Celine Dion's record breaking stay at Caesar’s? Even the nationally famous University of Nevada basketball team is overlooked. In fact, not once during the show do you hear the world ‘Strip, ‘ the nickname of the long street where most of the casinos are located.

Even so, Honeymoon in Vegas offers a nice slice of historical life from another generation amid a vibrant musical.