How Much Has Changed in the Forty Years Since the Yom Kippur War?

Daniel Mandel is a Fellow in History at Melbourne University and author of H. V. Evatt and the Establishment of Israel: The Undercover Zionist (Routledge, London, 2004). 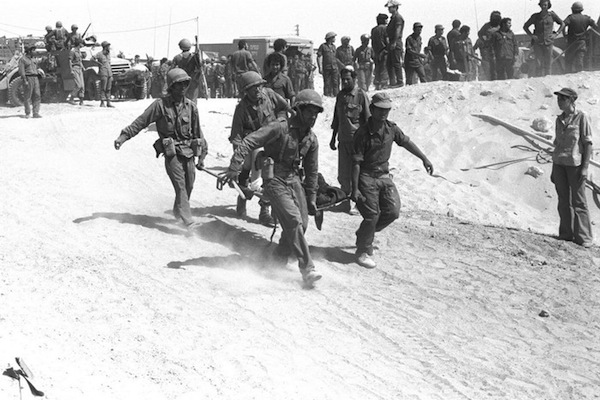 Forty years ago yesterday, on the morning of October 6, 1973, Egyptian forces bombarded the Bar Lev Line of Israeli fortifications along the Suez Canal before launching a full-scale crossing of the Canal into Sinai with 1,000 tanks and 70,000 men. They were soon joined by Syrian forces tearing deep into the sparsely-defended Golan Heights, territories lost to Israel by each of the belligerents a mere six years earlier in the 1967 Six day War. Israelis thus found themselves under lethal assault on Yom Kippur, the holiest day in the Jewish calendar, which soon came to lend its name to the war. (Being determined by the Hebrew lunar calendar, Yom Kippur, which came some weeks ago this year, rarely recurs on the same date in the Gregorian calendar). It also coincided with the Muslim holy month of Ramadan, by which name the conflict is recalled in Muslim societies.

For Israelis, it was a rude awakening from complacent confidence as well as a reminder of the vulnerability of their national existence. It put paid to the notion that the fabulous victory and territorial gains of the 1967 Six Day War would result in the losers coming to terms with Israel; that Jordan’s King Hussein, in the words of then-Israeli Chief of Staff, Moshe Dayan, would telephone an offer of peace and recognition. Arabs were not standing in a line to retrieve lost territory through negotiation.

For the Arabs, the 1967 war had been a disaster which Egyptian President Gamal Abdul Nasser needlessly inflicted on himself and others. Yet, no sooner sooner had the disaster become apparent, the Arab states took customary refuge in sulky and defiant non-recognition –– the three noes of the Khartoum Conference (no peace, no recognition, no negotiations). Nor, however, was Nasser’s successor, Anwar Sadat, passively resigning himself to the status quo as some Israelis supposed. Something other than complacency was required of the Israelis, doubtless accompanied by vigilance. The vigilance was there to a point; Israeli intelligence got wind of an impending assault, without this ever being entirely believed at the highest quarters in Israel until late in the day, while an Israeli pre-emptive attack, seriously contemplated by Israeli Prime Minister Golda Meir, was effectively vetoed by U.S. Secretary of State Henry Kissinger. In a world in which military support was now coming to Israel from the U.S. alone, Kissinger, intent on becoming the indispensable mediator in the negotiations he intended to open up when hostilities ceased, had his way.

The consequent war cost the lives of 2,687 Israeli servicemen, the bulk in the first two days of fighting. A mere 600 troops and three tanks on the depleted Bar Lev line were all that were ready to receive the first wave of the Egyptian assault on October 6. Israeli forces in the north were sometimes outnumbered by the Syrians ten to one and losses in tanks and aircraft were so high that by day four, Israel requested, and President Richard Nixon authorized, an emergency airlift of arms. Virtually all European nations, cowed into acquiescence by the threat of an Arab oil embargo, refused permission to the U.S. to land their huge transports. It fell to Portugal’s Caetano regime to permit the U.S. massive resupply effort, Operation Nickel Grass, to refuel at Lajes Field in the Azores and to the Netherlands Defense Minister, Henk Vredeling, to authorize the use of Dutch airfields to fly munitions to Israel without informing his Prime Minister, Joop den Uyl.

The rude shock of a war nearly lost, along with sacrifice of scarce reserves of blood and treasure traumatized Israel, as did also the televised spectacle of captive Israeli soldiers, despondent prisoners of Egyptians and Syrians, who had seemed invulnerable only weeks earlier. In the aftermath of the war, the Agranat Commission in Israel reported on the political and military failure to satisfactorily anticipate the Arab assault before controversially absolving the Defense Minister, Moshe Dayan, of serious responsibility. The weight of blame was thus left to fall on the Chief of Staff, David Elazar, a verdict controversial in Israel to this day.

Small wonder that October 6, 1973 marks for most Israelis –– and others –– the dividing line between pioneering statehood and everything that happened afterwards. The war came upon an Israel in the year of its enthusiastic quarter-century celebration. It banished a certain brand of Israeli confidence, perhaps even idealism. It set the scene for a watershed change of government in Jerusalem which, in four years, would follow for the first time in the country’s history. It gave the spur to dovish peace movements while egging on a budding movement to restore the Jewish presence the historical Jewish heartland opened up to Jews by the conquest of the West Bank and Gaza six years earlier. Little wonder Israel has never been as united as it once was.

The whole West was to soon reel under the unheralded impact of the artificially induced oil crisis following October 1973. The oil-exporting states of Gulf had the power, the short-term profit motive, but above all the vindictiveness, to subject the West to shock treatment for permitting Israel to live. The great economic convulsion they caused ended once and for all the long boom which the West had enjoyed since the conclusion of the Second World War. Only belatedly did the OPEC states discover that they could not long torment the United States and Europe, who responded in the long-term by harnessing alternative sources of energy. In any case, wealth accumulation was one thing, but OPEC states had given no thought to channelling their vast revenues into anything other than foreign acquisitions which must ultimately depend upon healthy trading partners. So after a period of calculated indignation, the oil squeeze was quietly dropped, but by then the world was a different place for all concerned.

At the time, the war changed everything in the international community where Israel was concerned. A world which had tensely gulped as Israel faced a Nasserite final solution in 1967 absorbed its first relief on Israel’s behalf by looking a little closer at the Palestinians now under Israel’s unsought occupation in the West Bank and Gaza, whom PLO terrorists were bringing to world attention through bomb and bombast. The oil crisis resulted in governments looking anew at Israel itself, the state that was seemingly causing them all this trouble.

In the democracies, ingenious formulations gave expression to a new, highly critical posture towards Israel. In the United States, President Ford would hint at “re-assessment” within a few years. “Even-handedness,” a form of neutrality which in practice amounted to indulging the Arab aggressors, became the order of the day and has remained that way largely since.

In the eastern bloc, fashionable forms of Bolshevik anti-Zionism had always been grafted onto old-style Czarist anti-Semitism. The Soviet support for Israel’s creation, loudly pioneered at the United Nations in 1947 by the now perennial foreign minister, Andrei Gromyko, had long been conveniently forgotten. Bolshevik hostility to a Jewish national existence had never in any case been abandoned at home. Jews now seeking to leave the Soviet Union for Israel found themselves retrenched, vilified, intimidated and not infrequently imprisoned as a consequence.

Indeed, in the wake of October 1973, the Soviets outdid the Arabs, with the mouth-pieces of Soviet official hypocrisy denouncing Israelis as Hitlerites, inflaming Arabs to do the same. Nasser had in any case paved the way by flooding the Arab world with the Czarist anti-Semitic tract, Protocols of the Elders of Zion. The culmination of this new campaign of anti-Semitism was the ‘Zionism is Racism’ resolution passed by the UN General Assembly within two years, on November 9, 1975. Poetic justice dictated that when the Soviet Union under Mikhail Gorbachev lent its hand to the eventual rescission of the resolution in 1991, its last official act of state was to reopen its Tel Aviv embassy, closed since 1967, at which the Soviet flag was raised for the last time before being immediately lowered and replaced by that of Boris Yeltsin’s Russian Federation.

For the Egyptians, the Ramadan War was a cathartic event, the all-purpose surprise and initial military success against the supposed Israeli colossus that had inflicted such repeated humiliation on Egypt. Egyptians still refer to “The Crossing” of the Suez into battle, and it has been celebrated in print and song. It enabled Sadat to discard the legacy of Nasserism with its pan-Arab fantasies and unfulfilled dreams of revenge upon the Jews for setting up their own state. No matter that the whole confounded conflict had been unnecessary, at least from the Egyptian point of view. No matter that Nasser himself had originally regarded Israel with surprising objectivity before allowing the blandishments of pan-Arabism and its attendant fantasy of obliterating Israel to corrupt him entirely. No matter that Yom Kippur ended, in military terms, with a conclusive Egyptian military defeat; much like the Suez War had for Nasser, in fact. Egyptians and Syrians, drunk with a premature sense of victory, turned down early cease-fire proposals which would have solidified their initial gains so that a massive reversal of fortune had to occur before lucidity returned to them, accepting along with Israel a cease-fire resolution of the United Nations Security Council, presided over by Australia’s Sir Laurence McIntyre. However, the mere fact of striking back at Israel, of catching one’s foe unawares, of inflicting loss of life and limb on the enemy, was seemingly the only form of satisfaction, of psychological restitution, that Sadat needed; again, much as Nasser had required not so much a victory than the humiliation of the colonial powers in 1956. And, indeed, Sadat proved able then to proceed and shatter one Arab taboo after another: broaching the idea of open peace talks with Israel; traveling to address the Knesset in Jerusalem, signing a peace treaty and exchanging ambassadors with the Jewish pariah state.

Arguably, nothing better illustrates why the Arab war with Israel is so durable, with a protean capacity to wax vigorous. In terms of the conflict that united Arab sentiment as does little else, Anwar Sadat was the most successful leader of the Arabs. He launched the most destructive attack on Israel ever devised by an Arab leader, secured later the return of Egyptian territory without firing another shot, and put the Palestinians firmly on the Israeli map through the autonomy provisions for the West Bank and Gaza. However, his Arab opponents, the Islamists only recently ensconced in office and then tipped out of it in Cairo, who required a stiffer dose of vengeance and for whom Israel’s elimination could not be remitted to an indefinitely later date, killed him. His treason was to have recognized Israel, irrespective of the advantages Egypt had thus accrued, and there were no degrees of guilt for a capital sin. Reviewing a military parade in 1981 on the eight anniversary of The Crossing, Sadat was gunned down.

In short, the gang-land politics of the Middle East defines the field, delimits the options and computes the consequences of statesmanship. That is why the Middle East sees so little of it. A war still kept in production by leaders more adept at finding the echo in the street to their own political adventurism than in shaping new departures cannot easily be called off, except at grave risk to a great many of them. Even creditable performance on the battlefield grants only a temporary ascendancy and merely a revokable warrant for change. That is one lesson of the four decades since Egyptian tanks rolled into Sinai.