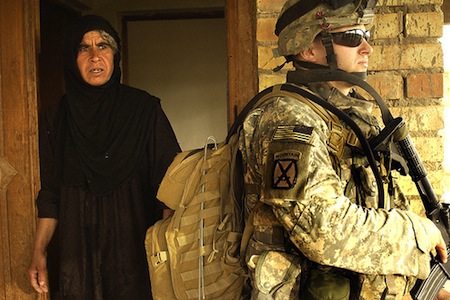 Iraqis have a phrase they use to describe the U.S. invasion and early occupation.  They call it “the collapse,” and in conversation the term is understood to mean the time covering the fall of Saddam Hussein to roughly the outbreak of mass sectarian violence in 2006.  Defining how Iraqis felt about the collapse is difficult, because the experience set loose so many conflicting emotions.  Anger mingled with joy.  Relief came with dread.  Hopefulness flowed with rage.  I have listened to dozens of recollections from Iraqis about this period.  I was a correspondent for Time magazine in Iraq from 2006 to 2009.  During that time I collected nearly one hundred oral history interviews from Iraqis in the hope of creating an historical account of the saga told entirely through their eyes.  My interviews always started with the same question.  Please tell me a little about your life before the invasion, I would say, and how it has changed during the war.  Some of the most vivid memories Iraqis held through all the years of conflict came in 2003.  I suspect those memories will remain some of the strongest for Iraqis who lived them for the rest of their lives.  Here are some of the ones that resonated with me when I first heard them.

Abu Mustapha, who worked at the Iraqi Department of Agriculture at the time of the invasion.  He recalled the initial bombings in Baghdad before U.S forces reached the city:

Those were hard days. Bombs blew out all our windows.  Some bombs even fell close enough to our house to crack the walls. All the shops were closed, so getting necessities was difficult.  There was no electricity and no gas for cooking. On top of all this we had no idea what would happen to us.  I was still going to the ministry sometimes during those days even though most government offices were closed. Some of us who worked there came periodically to check on the place.  I remember on one of the days I visited the ministry a huge sandstorm rose.  I had never seen one like this, not in all my years in Iraq. I watched the storm for a while from one of the upper levels of the ministry. The city was largely deserted below, where the wind was strong enough to pull up small trees. And the sky had turned completely red. This was not long before the American troops entered the city. I think that was the day the Americans bombed the Republican Palace. I can’t exactly remember, but it was toward the end.  Standing there in that storm you could feel the end was coming.  All of us in the ministry there that day knew it, and we all decided to go home to our families and not come back until things were clearer.

Gassan Abdul Wahed Ined, an Iraqi army officer sent to defend Najaf, a Shi’ite holy city home to the sacred Imam Ali Shrine.  In the final days, as U.S. forces encircled the city, Gassan sometimes moved through the streets in civilian clothes.  The American seizure of the city center took him by surprise one morning as he left the house where had been sleeping to avoid airstrikes:

I turned a corner, and there they were, the Americans. An infantry unit was moving through the city. There were thirty or forty of them on foot together right in front of me. I was actually sort of mesmerized seeing them so close up. I stared at their boots, their trousers, every bit of equipment on them up to their helmets I studied. I watched the way they moved and how they spoke to each other. Everything about them was so impressive to me as a soldier.  I followed them for a while, just watching. They were headed to the center of the city I think to rendezvous with other units that had entered from other points. There were a lot of people on the street watching them with me. Some were waving. Some were saluting. Some even came forward to shake their hands. I was close enough to hear the officer in charge talking with his interpreter as the unit came upon the Imam Ali Shrine. The officer seemed to ask, What’s this? The interpreter did not fully explain the significance of the shrine. He just told the officer that it was the home of someone very important to the city. The officer looked at it for a moment and then shouted out loudly with an order. Suddenly all his men were at attention, and they all saluted the shrine before moving on again.

Azhar Abdul-Karim Abdul-Wahab, who was a professor of political science at Baghdad University:

Baghdad fell on a Tuesday I think.  I went driving around our neighborhood, Karada, with my husband a day or two after that just to have a look around.  The looters were everywhere.  I saw women and children pushing trolleys full of things out of an old intelligence office.  At the national theater, they were loading a garbage truck with the seats from inside, and streams of people were coming out carrying all kinds of props.  I saw plastic models of the planets bopping down the streets in the arms of thieves.  They took everything you can imagine taking from a theater.  Everything.
I used to talk a lot with my colleagues in the days before the war about what would happen if the Americans invaded. Most of us wanted a change from Saddam Hussein, even if it meant having foreign troops destroy the republic. It’s not easy, you know, to swallow the idea of a foreign army coming to your country. Not even for us under Saddam Hussein who wanted to see him go.  But a lot of us felt that change needed to come, no matter how. What we did not know was whether that change would be for better or for worse.

I remember the first time I saw American soldiers. We were in a car on our way back to Baghdad from Kut shortly after the invasion. We had left Baghdad to stay with my wife’s relatives in the south during the bombardment. We were there for about a month before deciding to return to Baghdad. As we neared Baghdad I first caught sight of American troops manning a checkpoint overlooking a bridge going into the city.  They were just checking cars and standing watch as soldiers do.  I grew very angry seeing them there. It’s not easy to see a foreign army in your country, you know. I remember I was smoking a cigarette, and I crushed out the lit end with my fingertips as I watched those troops. I could hardly feel the pain because I was so angry looking on these occupiers.

Hussain Al-Awadie, who was a retired Iraqi army general living in a quiet Baghdad neighborhood near the airport at the time of the invasion:

Shortly after capturing the airport, American troops moved into our area. Overnight they suddenly appeared.  They were everywhere with all kinds of vehicles all of a sudden one day. It was a real shock how quickly they just swarmed us. Things were tense at first. If you wanted to go out you had to wave a white cloth over your head…  Gradually things eased up, and there was a period of calm before American troops started facing a lot of attacks in our area and elsewhere. In the afternoons sometimes in those days the Americans would walk around the neighborhood and browse the shops and eat food from the street stands.  They were very friendly toward everyone and seemed quite relaxed. They would play with the kids and sometimes have their medics look sick children over. Some in the neighborhood would try to talk to the soldiers, and they were all so very kind and polite. For me, watching the American soldiers there on the streets of my neighborhood brought such a strange feeling. Looking at them I would wonder what the future held. I could not see. And even though I knew the old army would fall from the very start, I still could not help but wonder, looking at these troops right there in front of me, how it all had come to this.

Omar Yousef Hussein, a writer and educator in Baghdad who eagerly joined a burgeoning insurgent movement that was taking shape even before U.S. forces reached the capital.  Omar recalled his first operation, a roadside bomb he planted with the help of several other insurgents:

We made our way to the road.  There were some shepherds there with sheep. They saw us planting the bomb but said nothing. It all seemed like a game, honestly. A game you might play as a child. We ran a wire from the bomb through the fields off the road and found a hiding place where the leaves and grass kept us from view. From there we watched. We did not have to wait long. It was a busy road.  The Americans used it a lot.  After about an hour we saw a Humvee.  This was in the early days, when Humvees were often seen alone, not always in armored convoys like later.  The Humvee approached, and at the right moment we detonated.  The explosion flipped the Humvee onto its side, and after a moment a crowd gathered.  We eased out of our hiding spot and joined the group on the street.  I don’t know if the Americans in the Humvee were dead or not. I just saw them being carried away on stretchers. No one walked away as far as I could tell.  I can’t say how the others felt at that moment, but I was in tears. I didn’t know whether I was crying out of sadness or fear or happiness. Maybe all those reasons. For me, that first operation was like breaking free from a whole life of oppression. I had grown up under Saddam Hussein. I had spent nearly a decade of my youth in his jails. I had seen my country invaded by a foreign army. All my life I felt beaten down by one hand or another. And now, finally, for the first time I was hitting back.