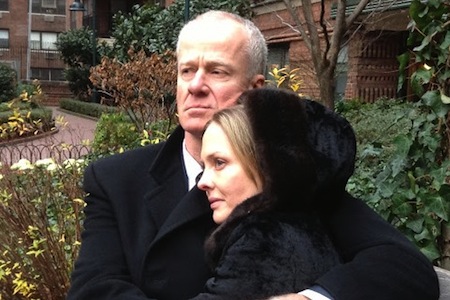 Scott C. Sickles’s new play Lightning from Heaven, now on stage at the Workshop Theatre Company in New York City, explores the question that millions of readers and viewers of the book and movie Dr. Zhivago have been asking for decades– was book’s heroine Lara based on someone in Zhivago author Boris Pasternak’s life? Sickles claims in his play that not only was Lara based on Pasternak’s translator, but she was his mistress for fourteen years. Their relationship, the play insists, is the relationship in the book and movie, set against the backdrop of the Russian history from 1905 to 1960.

Lightning from Heaven, which opened last week, is a torrid one, as sizzling as the love affair between Zhivago and Lara. Pasternak and Olga Ivinskaya carried on a romance while Pasternak was married, to the daughter of a colonel in the Soviet Army. Olga helped to edit his book and smuggled it out of the country to an Italian publisher. The book won the Nobel Prize for Literature in 1958 and was then made into a successful movie in 1965, starring Julie Christie and Omar Sharif.

The real love affair between the author and the translator is the plot of Lightning from Heaven. It was Olga who finally managed to get Pasternak’s book published, a scalding indictment of communism, and in the process made him a literary and political star. She paid a high cost. She was tossed into prison twice by Stalin, was impregnated by Boris and suffered a miscarriage. Her daughter, accused along with Olga for “smuggling” royalty money to Pasternak, was put in jail for three years.

Sickles’s story is an intriguing tale, and it certainly is an attention-grabber. The play not only follows the illicit romance, but examines in detail the machinations of the Soviet secret police as they interrogate Olga, confiscate evidence, smear her daughter and malign Pasternak. It is a fascinating look at the way a dictatorship operates, in all of its scary nuances. The play is full of high drama, deep characterization, and constant tension. It is a scathing look inside the nightmarish world of Soviet oppression.

It is also a good look at the story Dr. Zhivago. Fans of the book and movie always wondered how Zhivago could stay married to one woman and love another and how he would not be pushed for a divorce. The play explains that. It explains, too, how Pasternak was astonished at the success of the book.

The acting is good. Kari Swenson Riely steals the show as the tempestuous Olga, who seems to walk through Moscow with a target on her back for Pasternak’s enemies to shoot at. Director Thomas Cote gets fine acting from Mary Ruth Baggot as daughter Irina, Bob Manus as lawyer Victor Kasachevski. Jed Dickson is the sometimes heroic and sometimes oafish Pasternak.

The play might have shed more light on Pasternak. He was not simply an accomplished author, he was a courageous dissident. He maintained close ties with his friends Anna Akhmatova and Osip Mandelstam even when they were threatened with repression (Mandelstam was eventually killed during Stalin's purges). He was was the subject of long surveillances by the secret police; in 1934, after speaking out in favor of Mandelstam in 1934 to the editor of the Soviet newspaper Izvestia Nikolai Bukharin (who would himself be one of the most prominent victims of Stalin's purges), Stalin himself called Pasternak to berate him. Stalin’s aides even put him on a "death list" but the Soviet dictator scratched his name off.

People who have not read the book or seen the film will have some trouble following the story, but the overall plot, Soviet oppression in the 1940s and 1950s, should be fascinating to anyone.