The Siren Song of American Imperialism

William Astore teaches History at the Pennsylvania College of Technology. He retired from the Air Force as a lieutenant colonel in 2005, having taught at the Air Force Academy as well as the Naval Postgraduate School. He writes regularly for TomDispatch.com and History News Network. Cross-posted from the Huffington Post. 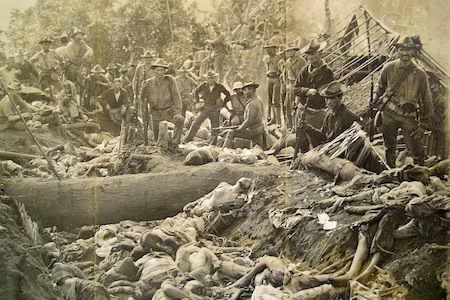 U.S. troops pose with dead Moro rebels in the Philippines, 1906.

Considering the scale of our mistakes over the last decade in Iraq and Afghanistan, if we as a country truly want to pursue a leaner, smarter, more effective foreign policy, the first step we must take is to stop listening to the siren song of our own imperial rhetoric. We need to stop posing as benevolent caregivers and start being more honest with ourselves.

And that honesty extends to our own history. The French have a saying that translates to, "The more things change, the more they remain the same." The appropriateness of that saying was brought home to me last week when a good friend of mine played an old campaign speech of William Howard Taft. In 1908, when he was running for president to succeed Teddy Roosevelt, Taft recorded several speeches on Edison-era cylinders. Fortunately for me, my friend collects vintage Edison phonographs and cylinders.

As I stood in front of the large trumpet-like horn of the player, Taft's voice came alive for me. As Taft sought to justify the U.S. invasion and occupation of the Philippines (where he served as the American governor-general from 1901-1903), it occurred to me that the rhetoric he was using a century ago was the same as that of Presidents Bush and Obama in justifying our most recent foreign misadventures in Iraq and Afghanistan. Taft, as we shall see, was if anything more direct and honest than our most recent commanders-in-chief.

The thrust of Taft's speech was that Americans were lifting up the benighted and "ignorant masses" of the Philippines. In Taft's words, we were involved "in a great missionary work that does our nation honor," one that "is certain to promote ... the influence of Christian civilization." Evidence of our progress included improvements to Filipino infrastructure such as the building of harbors, roads, and railroads. More evidence included our role in building up Filipino police forces to improve internal security. Education was also cited as decreasing "the dense ignorance of the ninety percent."

Having portrayed our presence in the Philippines as purely benevolent and disinterested, Taft ended with a rousing dismissal of critics who were advocating what today would be termed "cutting and running." To relinquish the "burden" of our civilizing mission in the Philippines, Taft concluded, would be "cowardly."

Considering Taft's rhetoric and comparing it to that of Bush and Obama, it's clear that little has changed in one hundred years. It's true that we no longer talk openly about spreading "Christian" civilization. And we're more circumspect about portraying native peoples as "dense" and "ignorant." But other than that, our imperial rhetoric hasn't changed at all. Our presidents still praise our country as being motivated entirely by benevolence; as evidence of our generosity and "progress," they still tout infrastructure built and native police forces trained; and they still dismiss critics of our imperial efforts as misguided (at best) or cowardly (of the worst kind of "cut and run" variety).

Whether it's the presidential election of 1908 or our current one of 2012, we've heard enough speeches about how great and noble and honorable we are. To chart a new course, let's educate our own "ignorant natives" in the USA before we try to cure ignorance elsewhere. Let's rebuild our own crumbling infrastructure. Let's tame our own passions. And let's reconnect with a virtue that, though not unique to Christianity, was then and is now closely associated with it. The virtue? Humility.

To put this in words that may have resonated with Taft, the self-styled "Christian missionary," let's first work on removing the beam from our own eye before focusing on the motes in the eyes of others. For it's only after removing our own beam that we'll succeed in charting a smarter foreign policy -- as well as a far less hypocritical one.

To paraphrase Taft, it would be cowardly indeed to lay down the burden of removing that beam until our purpose is achieved.