Antonio Ramirez is a PhD student in the Department of History at the University of Michigan. 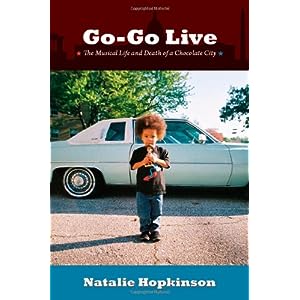 When I felt a deep rumbling and heard muffled shouts from a microphone, I guessed it was a political rally. Recently arrived in Washington D.C., I was wandering the U Street neighborhood, taking in the city’s distinct rowhouses and sweating in the intense mid-Atlantic heat. But as I approached the intersection of 7th and T Streets, the crowd came into focus: it was hundreds of people, almost all black men and women, dancing in the street.

When I arrived in Washington for an internship this summer, I knew very little about the city. Like a lot of folks, I had seen the Washington Monument and the Capitol on an eighth-grade school trip. And of course, the Lincoln Memorial and the White House stand tall and gleaming white in our collective national conscious. The city of Washington D.C., though, is very different than what most outsiders imagine, a distinction Natalie Hopkinson draws in Go-Go Live: The Musical Life and Death of a Chocolate City, a chronicle of black Washington’s dynamic indigenous music, go-go:

Beyond the federal capital, Washington, lies a very black city, D.C.: Black families milling around on the streets, waiting at bus stops, driving cars. Black schools taught by black teachers and run by black principals reporting to black superintendants. Black restaurants, black recreation centers. Black universities. Black hospitals run by black doctors and staff. Black suburbs. Black judges ordering black police officers to deliver black suspects to black jail wardens. For much of the past half century, it was entirely possible to live and work in the District of Columbia and not interact with a white person for months. (ix-x)

This was the Washington I saw while living in a middle-class section of Petworth, a historic neighborhood that has been majority black since the 1960s. Neighbors told me that many families have lived in Petworth for decades, developing a tight knit community. Most people say hello on the street, or shout greetings and wave from their porches, even to strangers like myself. One woman used to chat to me about the heat or current news every time I walked by her house. “How do you like our neighborhood?” she asked one day.

She meant how did I, an outsider, like living in a neighborhood that had been almost entirely black for decades. It was a friendly and honest question in open recognition of Petworth’s recent and rapid gentrification. In 1999 a new Metro stop was constructed in the center of the neighborhood, against community protests. Soon organic grocery stores, bars and coffeeshops catering to mostly white young professionals starting springing up alongside older Jamaican jerk chicken carryouts, barbershops and corner stores with mostly black clientele. Hopkinson tells us that The Ibex, once an important Petworth go-go club, was renovated into luxury lofts in 2006. (99)

Petworth reflects larger changes in the city. Washington is considered to have hit its nadir in the 1990s when it was dubbed the nation’s “murder capital.” Since then, development dollars have led to major demographic shifts, mostly fuelled by the movement of black Washingtonians to the nearby suburbs, and the arrival of Latino immigrants and wealthy whites to the city. The U Street corridor, called the “Black Broadway” in the early twentieth century and burned to the ground during the 1968 riots, is now lined with expensive condominiums like the $660,000 two-bedroom recently purchased by Supreme Court Justice Sonya Sotomayor.

By July 2011, the census announced that D.C. was no longer a majority black city. And the hundreds of D.C. residents I saw dancing in the streets a year later were lamenting another change: Chuck Brown, the “Godfather of Go-Go,” was dead.

Released only a month after Brown’s death, Go-Go Live is a timely examination of how go-go, a Latin-influenced musical style that emerged in 1970s black Washington, fits within the complex, overlapping systems of race and power that make up Washington D.C. and its neighborhoods. Hopkinson, a contributing editor at The Root and lecturer at Georgetown, tackles the subject with a ferocity fitting a musical form that fuses West African call-and-response, hip-hop, Latin congas, reggae and funk into infectious dance hall music.

Go-Go Live provides an interesting, though minimal theoretical framework. It argues that go-go was birthed in a black public sphere whose borders were defined by segregation and oppression, and whose cultural and economic innovations were spurred by 1970s deindustrialization and the new market for crack cocaine in the 1980s. Go-go was, and is, “Black CNN,” a black-owned discourse that has resisted commercial hip-hop’s standardizing influence and has, in Washington, “remained the dominant manifestation of black youth culture, with locally rooted fashion styles, slang, and dance.” (11)

Hopkinson bases her approach in the urban ethnographic tradition, citing, among others, Tally’s Corner, Elliot Liebow’s seminal study of black men in D.C.’s Shaw neighborhood. Following the reflexive turn in urban ethnography, Hopkinson is a major figure in her own narrative, explaining her transnational Afro-Caribbean roots, childhood as a black woman in white America, and studies at Howard University. The result is an accessible story where Hopkinson jokes around at storefronts stuffed with bootleg go-go recordings, hangs with legends like Big G of the Backyard Band, and rides shotgun with Grandview Ron, a tough go-go enthusiast whose reflections on music and culture are so shockingly beautiful that Hopkinson simply quotes them for several pages.

The force of Go-Go Live, though, lies in its stories. By allowing tales of go-go’s recent past to explain the genre’s triumphant highs and tragic lows, Hopkinson creates a rigorous, highly readable account that can be enjoyed by both scholars and go-go aficionados. A striking example is Club U, located on the ground floor of the Frank D. Reeves Municipal Building on U Street. Hopkinson uses official meeting minutes to tell the story of a government building that, after municipal workers clocked out, hosted go-go bands and dancing late into the night. For more than a decade, Club U was weekend entertainment for hundreds of black Washingtonians, until a 2005 a murder sparked a racialized debate that demonized go-go and amplified tensions around the looming gentrification of U Street.

Hopkinson also successfully argues that go-go music -- despite being pathologized by government officials, law enforcement, and both the white and black middle-classes -- is a legitimate source of historical and cultural information. Go-go can be understood, she argues, as a local manifestation of global black music whose roots can be traced to the historical African American experience, the African continent, and the Caribbean. And as a “Black CNN” whose performance centers around publicly recognizing important figures in the audience, go-go recordings are valuable records of 1970s, ‘80s, and ‘90s Washington that have been meticulously retained on thousands of cassette tapes and CDs by untrained, yet highly competent, local archivists. To demonstrate, the book’s final chapter is an in-depth analysis of an important 1986 Rare Essence recording that captures the peak of go-go’s popularity, the rise of Washington’s underground drug economy (the band’s lead talker makes a few shout outs to emergent drug lords), and identifies key players and crews in mid-1980s black Washington. This methodological contribution itself makes the book worthwhile.

By virtue of its innovation and daring, Go-Go Live, like go-go music itself, takes major risks that occasionally fall short. Hopkinson’s role as the book’s narrator often betrays a personal tone that is at times acerbic and two-dimensional, especially when describing the complex phenomenon of white migration to historically black neighborhoods like her own Logan Square. Though perhaps justified, her analysis ignores recent scholarship on postwar cities that has sought to complicate our understanding of urban decline and uncover the deep historical roots of phenomena like white flight and suburbanization. This scholarship has also sought to uncover the role of the public and private sectors in incentivizing metropolitan migrations of white residents and the tax base, observations that could be especially useful when considering the role of the federal government, the city’s black leadership, and private investors in the recent remaking of Washington.

Hopkinson also pays too little attention to how go-go sounds, admittedly a difficult task. In Chapter 3, she describes the lead talker, the drums, and call-and-response with the audience, but mostly overlooks the music itself, instead favoring its cultural and social meanings. When I arrived at the commemoration of Chuck Brown at 7th and T Streets, there were a few balloons and some signs, but most important were the sounds that were coming from the speakers: Brown’s deep voice, his guitar, the brass horns, congas, synthesizers. These sounds -- alternately seamless and disparate, rough and melodious, and undergirded by a bouncing, driving, hypnotizing beat -- are central to the power of go-go.

Similarly, Hopkinson also fails to include what I believe to be an important, if unrecognized, factor in both go-go and its urban context: Latinos. Chuck Brown’s first gig was playing in a band called “Los Latinos,” and he sparked go-go by combining Latin percussion with horns, keyboards, and call-and-response. Indeed, go-go often sounds like a funked-out reggaeton and its melodic lines and vocal arrangements reflect the complexity of salsa. Hopkinson also frames Washington’s recent urban context in a black/white binary that ignores the long-standing Salvadoran population, and other Latinos, that live and work alongside African Americans in D.C., Maryland and Virginia. The book’s few comments on black-Latino relations mostly come from Grandview Ron, who explains that D.C. Latinos follow the dominant black culture, making them “Black-tinos.” (118) Further analysis could clarify the sociology and history of black Washington vis-à-vis D.C.’s Latinos. Indeed, soon after arriving in Petworth, Honduran neighbors asked me to translate an asylum application to Spanish, an experience that uncovered a scary world of poverty and drug violence that directly links D.C. and Latin America, and mirrors (and is related to) the turmoil of late twentieth-century black Washington.

As a whole, Go-Go Live is a compelling, methodologically bold ethnographic history of a city and artistic form that have both received too little scholarly attention. And in the wake of Chuck Brown’s death, its content and style can be appreciated by academics and go-go fans alike.